‘Blasting music in the dead of night’: China seeks to regulate dancing grannies

China is considering regulating the country’s notorious square-dancing grannies including introducing fines and penalties in a series of amendments to legislation aimed at curbing noise pollution, Xinhua reported on Tuesday (Aug 17).

While public square dancing is not the only focus of the curbs, the controversial practice has been a constant source of tension in China in recent years.

Elderly dancers are a common sight in public parks, squares and plazas in China at dusk or dawn, where groups of retirees dance in unison to what is often described as deafeningly loud music.

For the elderly women, and a few men, this is a low-cost way to stay fit and socialise, but noise complaints from residents living nearby have increased dramatically in recent years.

In the past, some residents have pushed back by publicly confronting the retirees, installing decibel counters, and in some cases throwing faeces and eggs at the groups.

A 62-year-old square-dancer surnamed Long told the South China Morning Post she has not yet heard anything about the regulation, but was not concerned.

“If they won’t let us dance, we’ll figure out something else then,” she said.

Amendments to existing noise pollution law from 1997 are currently before the Standing Committee of the National People’s Congress, China’s legislative branch.

Entertainment and exercise in public places would be required to observe rules restricting the places and times they can perform. Anyone in breach of the new rules could be fined from 200 (S$42) to 500 yuan.

The amendments also include extending the legislation to include smaller rural villages, more planning for the control of industrial and transport noise, and adding standards for vibration control.

Many in China reacted positively to the news. “Those ‘celebrities’ disturb residents during the dead of the night, blasting music with their speakers,” one said on Weibo.

“I hope there will be regulation for people being noisy upstairs, for others’ air conditioners and playing the piano at night,” another said.

Chinese authorities have tried to rein in these groups in the past with little success.

In 2017, the General Administration of Sport of China issued a notice warning “noises of square-dancing and exercising should not affect students attending classes and residential livelihood”, but it had little impact as there were no penalties attached. 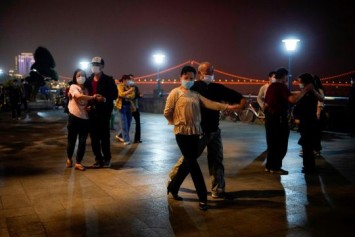 In 2014, groups of grannies even took square dancing to a series of famous international locations, dancing outside the Louvre in Paris and in Moscow‘s Red Square, which led to a backlash in China, with many saying they presented a bad image of the country.

Even if the new laws are passed, the bigger problem, which is the lack of public amenities for the elderly, especially in the face of a rapidly ageing population, remains unresolved.

By 2030, China is estimated to have 370 million people over the age of 60, according to the Chinese National Committee on Ageing.