Boy in China shows off at kindergarten graduation, policeman carries old lady on back, girl helps man in heatwave

A handout photo. Internet delighted by little boy showing off his kindergarten graduation certificate and a kind police officer carries a lost old lady on his back to find her home.

A video of a boy in China proudly showing off his kindergarten graduation certificate to his mother has delighted Chinese internet users.

"He was so happy and so excited," his mother said. "He was in a hurry to show the graduation certificate to us, telling us, 'This is my name and this is my picture'."

Internet users were delighted by the boy's cheerful behaviour.

"This video should be played repeatedly at his wedding," one user said on Douyin.

Another person joked: "Does he think he will not need to study any longer?"

Policeman carries lost elderly woman on his back

A 19-year-old auxiliary police officer helped a lost elderly woman find her way home on a hot summer evening by carrying her on his back, leaving his uniform drenched in sweat, the People's Daily reported. 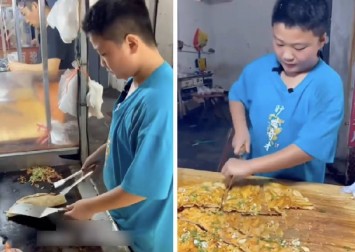 When officer Zhou Weijie and a colleague were on patrol in Yiwu, Zhejiang province, eastern China, one evening last month, they found an elderly woman alone on a wooden bench. She looked anxious and couldn't tell them her home address and appeared to be confused.

As she walked unsteadily and slowly, Zhou took it upon himself to carry her on his back while they helped her look for her home.

After checking some nearby apartment blocks, they still couldn't find the woman's home and she became upset.

Zhou then contacted a nearby police station which confirmed her identity. According to the woman's relatives who came to pick her up, she is 89 years old and has Alzheimer's disease.

"I am young. It's fine for me to carry a grandma on my back. It's my job and this is what I am supposed to do," Zhou said.

When a seven-year-old girl and her mother saw an elderly man fall from a pedicab during a heatwave, the girl insisted her mother help him.

The mother, a resident of Xiangyang, Hubei province in central China, said she originally wanted to just turn a blind eye to the man's predicament. She had heard recent news reports of old people deliberately falling down and then blackmailing Good Samaritans who went to help them, Star Video reported.

But after being begged by her daughter, the mother went and checked on the man.

Although she dared not touch the old man, she took a video of her conversation with him and then called the local police.

Meanwhile, her daughter held an umbrella shielding the man from the sun and temperatures of 40 degrees.

Eventually, a police officer arrived and took the man to a hospital.