Company sources said the theft of items that could have been used for future flights had cost the carrier ‘untold hundreds of millions’ over the years.

A crackdown at Cathay Pacific Airways on flight attendants helping themselves to company supplies has sent shock waves through the cabin crew community after a handful were caught red-handed over the weekend.

Such petty theft by staff at Hong Kong's biggest airline had long been treated as an unofficial perk, with crews taking home everything from cutlery and wine glasses to bottles of champagne and even pieces of bread, according to company and cabin crew sources.

The sources said the theft of items that could have been used for future flights had cost the carrier "untold hundreds of millions" over the years. Flight attendant unions said they backed the "zero tolerance" approach but expressed concerns about how staff searches were being carried out. They added they would be seeking legal advice.

One of the most popular items had been the small pots of Haagen-Dazs ice cream served in flight. Cabin crew had been known to have freezers at home packed with the stuff.

"In view of an increasing number of reported losses of company property, we have informed our cabin crew that random inspections will be carried out," a company spokeswoman said. 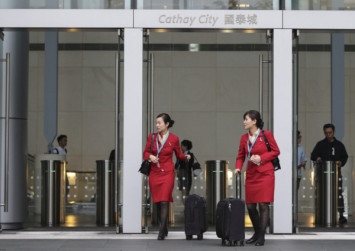 "We are dealing with cases in a fair and reasonable manner in accordance with standard internal procedure."

Cathay earlier warned staff through a memo sent in January about the "unfortunate increasing trend of company property discrepancies".

Ed Higgs, general manager of in-flight services, said employees would be inspected by a security team on leaving an aircraft "for any items that you may have in your possession when you have been or are on company property".

Only crew-designated catering placed on board for staff to eat should be removed, which included water, fruit and film-wrapped sandwiches, the airline said.

From wet wipes to company branded-pens, an array of items had been taken by flight crews over the years. To avoid any doubt over policy or procedure, the company memo said even the removal of peanuts constituted a breach.

"Zero tolerance means you are not permitted to take off the aircraft any item other than what the company has authorised as per the policy," Higgs said. "If anyone removes company property, irrespective of the value or if you believe it will be thrown away, you will be subject to discipline which may include termination." A flight attendant who did not wish to be named said crews often took food they believed would otherwise go to waste. Photo: South China Morning Post

Cathay Pacific Flight Attendants Union chairwoman Vera Wu Yee-mei, representing more than 7,000 of the carrier's 10,000 cabin staff, said petty theft was a clear breach of company policy. However, she raised concerns about how searches were being conducted and said the union was seeking legal advice.

"All staff understand there is a policy posted very clearly on the company intranet," Wu said. "You would be putting your career in a very risky position, just for water, bread or a pen."

The union said a solution would be for an independent witness to observe searches.

Wu suggested the motivation behind the crackdown was cost rather than rule adherence.

"The company always talks about costs, and maybe lately they find the discrepancies are increasing," she said.

So far, only one union member has faced the threat of company sanction after staff representatives appealed for first-time offenders to be let off with a warning.

A flight attendant who did not wish to be named said crews often took food they believed would otherwise go to waste, as Cathay typically oversupplied its in-flight customer trolleys.

Hygiene and food safety rules also prohibit the removal of food or drink from a plane, but there are exceptions, such as unopened bottles of alcohol or caviar.

Rebecca Sy On-na, who represents sister airline Cathay Dragon's roughly 1,900 flight attendants, said the company "no doubt has the right to protect its property". But she believed food should be exempted if it was at risk of going to waste.

The issue of petty theft has a storied past at Cathay, dating back to a crippling three-week strike in 1993 by flight attendants demanding better working conditions.

A prominent leader of the strike, Courtney Chong Cheng-lin, was sacked months later, accused of stealing a packet of nuts, a bottle of water and an in-flight magazine.

After a five-year battle to claim damages for defamation, she won a multimillion-dollar, out-of-court settlement.

The airline posted a HK$2.3 billion (S$397 million) profit in 2018, its first positive result in three years amid a three-year restructuring plan, which began in 2017. The reforms have included several hundred job losses as part of a drive to save HK$4 billion.