The lover of a cheating Chinese bride - who humiliated her bridegroom by having sex with the other man on the eve of their wedding - has sparked an online storm by releasing salacious details of their explicit internet chats.

A Chinese bride-to-be who dressed up in her wedding gown to have sex with another man on the eve of her marriage ceremony has been forced to go into hiding following a furious online backlash over her behaviour.

The scandal involving lurid details, broken trust and family heartbreak has touched a raw nerve on mainland social media and online soul-searching over the sanctity of marriage.

The woman’s actions were first revealed when explicit online sexual conversations she had with the other man, who uses the online nickname Xiaobailong - which means Little White Dragon in English - were made public by him “to show off his ability to charm”, according to the news portal 163.com.

An avalanche of internet condemnation of the woman, surnamed Wu, followed as the explicit posts were widely circulated on the internet.

Wu’s bridegroom, who lives in the city of Zhangjiajie in central China’s Hunan province, was told about the treachery on the eve of the couple’s wedding ceremony - they had already legally registered the marriage - by a friend on November 9.

The heartbroken husband said he had reported the matter to the police “to protect his rights” and had filed for divorce.

Two days before the wedding, the bride chatted with Xiaobailong - a man she had sex with multiple times before - and showed him photos of her dressed in the wedding gown, telling him her new home address.

Xiaobailong then proposed they have sex the next day – just 24 hours before the nuptials - and Wu agreed.

He then suggested what he described as the “brave idea” of not using contraceptive protection, adding: “Leave it up to God. Let’s see whose baby you will be pregnant with.”

“Leave it up to God. I am not afraid,” replied Wu.

The next day the wedding ceremony went ahead as planned.

It was then that a boastful Xiaobailong shared his conversation with Wu in a WeChat group, telling a person in the group who asked what would happen if Wu fell pregnant, “It’s none of my business who will be the father.”

After being made aware of the incident, the enraged husband, said he reclaimed 200,000 yuan (S$39,000) worth of betrothal gifts he had given to her family in keeping with Chinese tradition.

As the public clamour of condemnation grew online and around the city of Zhangjiajie, following the publication of photos of Wu and husband, the treacherous bride left town. 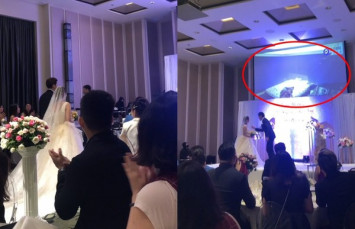 The bridegroom said the scandal has affected his health to the extent that he needed hospital treatment. His mother has also been hospitalised after falling ill due to the humiliation, 163.com reported.

“This incident has had a big impact on both families. I hope everybody would not be so mean,” the bridegroom said on Douyin. “Adults should be responsible for what they say and do. The internet is still governed by law.”

His Douyin account was flooded with messages from netizens trying to comfort him.

“You are lucky to have found out the truth in a timely manner, or you would have been cheated on for your whole life,” said another.

A third person wrote: “This case makes me feel frightened about getting married.”