A barista waves out of a ‘hole-in-the-wall’ cafe in Shanghai.

On a narrow street full of coffee shops and bars in the central urban area of Shanghai, a hole on a grey wall features a strange sight: a furry bear claw pointing to a QR code, encouraging people to use it to order their caffeine fix for the day.

Wearing the bear claw was a deaf barista working at a cafe named Hinichijou, a small business that only hires people with disabilities.

The cafe only serves takeaway orders, and the baristas must watch a security monitor to see when customers are arriving. They take the order through the QR code system, serve the coffee through the hole and shake the customers’ hands with their bear claw before waving goodbye .

The original cafe is famous online and has become a staple of Yongkang Road, a Shanghai street famous for its bars and restaurants.

Since opening in December 2020, Hinichijou found quick success and now has nine locations across Shanghai, all focusing on providing work for people with disabilities.

With over 20 staff members across all of its branches, most of whom have hearing or speech disabilities, the cafe has remained a trendy phenomenon in China’s biggest coffee-consuming city.

He said the idea of using a bear claw to serve coffee through a hole was inspired by two baristas who did not want to be seen by the public.

One of them, named Ying Ying, cannot speak or hear but won first place in a national disabled baristas competition in 2019. The other person had severe burn scars across their face.

“Ying Ying is marvellous, but no one wanted to hire her because of her disability. We then talked about helping her start a coffee shop, and she said she did not want to show her face, which was the same as [the barista with scars],” said Tian Tian.

“The public welcomed us, and after more than a year, baristas with hearing and speech impairments have become very popular in the local job market. We’re happy that other coffee shops are also willing to employ them now,” he said.

According to the China Disabled Persons’ Federation, there are more than 85 million disabled people in the country. By the end of last year, over eight million of them who were of working age did not have a job.

People with disabilities often have limited job opportunities in China, as discrimination is still common in employment despite government intervention in the past decades. Due to limited accessibility to public facilities, many disabled people spend a significant amount of time at home.

Initially targeting those with hearing and speech disabilities, Hinichijou is now trying to include visually impaired people. Its latest shop, opened last month, is run by two young blind men.

Read Also
'Give them a chance': Marina One restaurant that employs youths with disabilities faces thin crowds 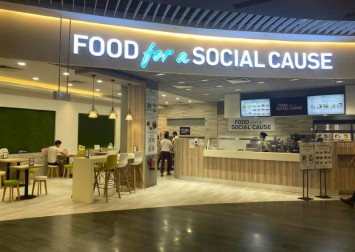 Tian Bao and Tian You, twin brothers with vision impairment, serve coffee in a booth built for them outside a shopping centre and run the business mainly using their sense of touch.

Unlike the other Hinichijou shops, which are designed as a hole in the wall, their shop tried to “break the wall”, as it has a standard counter so people can see how the brothers prepare the coffee and interact with them.

With almost everything in the booth tailor-made for blind baristas, the twins became familiar with the coffee-making process after several months of training.

“The buttons on the coffee machines are made into different shapes so we can tell each one’s function,” Tian You said.

“I hope blind people have more choices when it comes to finding work. I want to prove that we can do other jobs well, and not just become masseuses,” he said, referring to China’s massage sector, which is a common work avenue for people with vision loss or impairment.

Tian Tian, the co-founder, said the twins are an inspiration, and more than 30 people with the same disability have so far signed up for their barista’s training course, hoping to widen their own job prospects.

“What we’re trying to do is to turn a person who may rely heavily on their family and society into a confident, independent member of their community,” he said.