China's golden week during the national day holiday is one of the best times for couples to get hitched.

And the richest family in Shaoxing, Zhejiang, did it with such pomp last week that their company's stock prices plunged after the lavish ceremonies.

Behold the wedding entourage - the bride Shen Jiani was carried to her marital home by a Chinese sedan, followed by a long line of wedding gifts and a bevy of luxury cars.

The display of wealth was captured in a video clip shared on social media and provoked exclamations among netizens.

Many may mistake the scenic wedding venue for a park, but the intricate Chinese-style garden is, in fact, part of the Wu family home.

During the traditional Chinese ceremony, the bride looked like she might break into a Chinese opera tune anytime. This may be a custom in the city, as Zhejiang is well-known for its Shaoxing opera.

The couple later exchanged wedding vows in a Western-style ceremony with some of the country's rich and famous bearing witness. 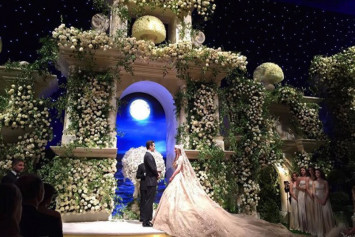 Wu's father, the founder of Wanfeng Auto Holdings Group, is one of China's top billionaires with a net worth of US$2.3 billion (S$3.2 billion) as of 2016, according to Forbes' China Rich List.