China cancels Christmas: Why Santa Claus is not coming to town for Chinese kids

A Christmas market in Shanghai.

Josie Wang and her family are not Christian. But they have celebrated Christmas every year since 2016.

That was the year her son William, then a toddler of three, started learning English with a private education company in Beijing.

Christmas then meant singing carols under the tree with his tutors. As Wang’s flat was too small to put up a Christmas tree and festive decorations, she would usually leave the boy a gift on behalf of Santa, to “reward his good behaviour”.

William, now eight, has been very good this year. But the little boy is likely to still end up on Santa’s naughty list.

As private education companies across China shut English-teaching centres following a crackdown, and public schools shun foreign festivals at a time of surging nationalism, non-religious parents like Wang are finding it hard to celebrate the holiday in a mundane, non-commercial way like before.

The centre William went to closed its English service in the autumn.

“Last week, when William asked why nobody talked about Christmas and whether it would be celebrated this time, I had a hard time explaining what was going on,” said Wang, 38, an employee of a private logistics company.

“Children like Christmas for the joy and warmth of the festival and gifts from Santa. They don’t receive a gift on any traditional Chinese festivals. For the Lunar New Year, they get a red packet from grandparents. But that’s money, not gifts.”

Extracurricular English tutoring services have long prospered in China, especially after the country joined the World Trade Organization in 2001 and English was seen as the link language for the world’s increasingly integrated economies.

In recent years, it had become quite common in big cities to see children as young as three signed up for English classes held by native speakers, whether on site or online, and following foreign textbooks.

But all that changed in July when, citing the need to reduce the workload for pupils and financial burden for parents, as well as tighten ideological control, Beijing launched a slew of policies to reform the country’s private education sector.

Under the new rules, such centres are barred from accepting foreign investment and profiting from teaching subjects such as mathematics, English and Chinese. Also banned is the use of foreign curriculum, or hiring foreigners based outside the country for online lessons.

The measures have led to a spate of closures, among them a Beijing-based education start-up, VIPKid.

The private tutoring company, valued at more than US$3 billion (S$4.07 billion) at one point, stopped offering its flagship English services in China last month. At the time, it had some 90,000 teachers in the US and Canada on the rolls, with almost a million Chinese students signed up for classes, according to the company.

“Public schools don’t celebrate non-Chinese holidays. It’s a pity that with the exodus of the private education companies, China’s children seem to have little access to Christmas,” said Wang.

Christmas is not a public holiday in China, which is home to 68 million Christians, making up five per cent of its population. However, Christmas has been an ultra-popular holiday among young people since the 1990s.

Huge numbers of urban Chinese celebrate a commercialised and religiously sterilised version of Christmas, when they shop, date, skate and have a feast.

But in recent years, in a bid to resist Western cultural influences, governments around China have been trying to cool the public zest to celebrate Christmas. 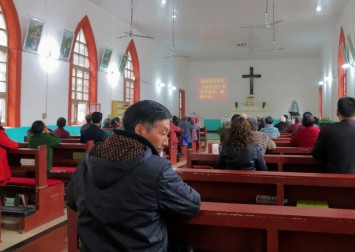 In 2006, a group of graduate students, including those from the elite Peking and Tsinghua universities in Beijing, set off a spirited debate with an open letter condemning Chinese people for their growing tendency to celebrate the festival. But the open criticism failed to extinguish public interest in the celebrations.

However, amid rising nationalism triggered by the Sino-US trade war in 2018, local governments from Hebei in the north to Guizhou and Guangxi in the south have been issuing orders to ban extravagant festive decorations and large-scale gatherings to celebrate Christmas.

It is still all right for shopping malls and stores to put up decorations and launch festive sales promotions, but they must maintain a low profile. Schools and universities across the nation have been instructed by education authorities not to celebrate “Western festivals”.

Helen Zhang, 35, an English teacher at a public primary school in Shanghai, said it does not host Christmas celebrations.

“We introduce foreign festivals to students according to our curriculum. But we don’t organise celebrations for any Western festivals,” said Zhang, who has been with the school for nine years.

“We celebrate the New Year, but not Christmas or any non-Chinese non-statutory holidays,” she said. “It’s a rule emphasised by education authorities again and again in recent years. We are told that any teacher found in violation [of the rules] will be punished.”

Peter Li, 44, a civil servant in Beijing, said he would not buy a Christmas tree for his two daughters this year to “avoid trouble”.

“Many colleagues and friends are boycotting Christmas to demonstrate their patriotism after watching [Korean war epic] The Battle at Lake Changjin in October,” Li said.

“Though I enjoy decorating the tree with my kids, I’ve decided we will no longer celebrate Christmas for the sake of political correctness.”

One of the many patriotic productions launched this year to celebrate the 100th anniversary of the Chinese Communist Party, The Battle at Lake Changjin depicts a pivotal Korean war battle as a fight between earnest Chinese soldiers and sadistic US troops.

In the film, while US soldiers are eager to finish the battle and head home for Christmas in 1950, their poorly equipped Chinese adversaries, even while living on frozen potatoes in sub-zero temperatures, stand their ground and fight to the last.

An online campaign followed the film, with thousands of users on social media platforms including Weibo and Douyin vowing they would not celebrate Christmas any more to commemorate the sacrifice made by those Chinese soldiers.

Those sharing photos of classic festive decorations like fir trees and fairy lights on Weibo, Douyin and other social media platforms often encountered harsh retorts like, “Haven’t you seen The Battle at Lake Changjin?” or “Have you forgotten your vow to stay away from Christmas?”

The reasoning behind such a boycott is not clear to all, but many parents would simply prefer to play it safe amid the mounting nationalism.

“I don’t see the direct link between Christmas and patriotism. I think most Chinese celebrate the holiday just for fun,” Li said.

“Anyway, it is easy for people to be judged politically nowadays. To play [it] safe, I have to forgo Christmas and let down my kids.”