Specialists were brought in from across China to carefully restore the dilapidated building.

A historic building in Chongqing in southwestern China, constructed more than 100 years ago during a time of foreign influence in Chinese architecture, has been restored as part of a bid to preserve the city’s Western heritage.

The abandoned building which once was the headquarters of a British merchant was abandoned many decades ago and forgotten as trees and vines took over and surrounding mansions sprang up and obscured the site from public view.

Si Wei, a member of Chongqing Municipality’s historical building restoration team which led the effort to restore the building, said when he first saw the structure it was completely forgotten and run down.

“It was covered by trees and grass and pretty much looked like a haunted house,” he told the Global Times.

The building dates back to 1896 and was built on the banks of the Yangtze River in Chongqing, southwestern China, by British merchant Archibald John Little. Little was an enterprising merchant who braved the journey up the Three Gorges Valley to build his trading empire in Chongqing.

Little erected the building as the headquarters for his business, Little & Co. It was used for the storage and distribution of a wide variety of food goods.

The building is decorated with intricate carvings of cabbages in the Hui style and features wall art portraying animals like bats and sculptures of produce like pumpkins, peaches and persimmons.

“The cabbages are there because Little was a businessman. The pronunciation of cabbage in Chinese is baicai , which sounds like the auspicious phrase ‘money from a hundred directions’. Bat is pronounced bianfu, the fu part of which sounds similar to the word for good fortune,” Si said.

Specialists were brought in from across China to carefully restore the building and preserve its historic elements such as the distinctive reddish-brown colour of its walls, while also modernising it with electricity and internet access.

Read Also
Quirky China: A dog is 'saved' from his home, a woman is pregnant with octuplets and a haunted house finds buyers 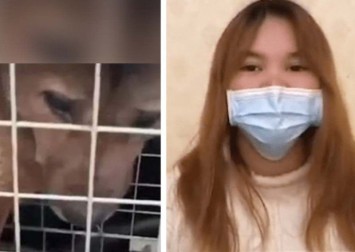 “The combination of Chinese and Western elements embedded in the architecture is very distinctive, and the restoration team has made great efforts,” said Zhong Xiaoxi, chairman of Chongqing Yudi Vision Culture Industry Co, which undertook the restoration project.

The project which began in 2020 has been slow going because the materials used in the original construction had to be painstakingly recreated, such as the Qing dynasty period grass dragon pattern on the building’s pillars.

“There are almost no kilns that still make such delicate ancient works, but we managed to find a small one to produce some for this building,” said Si.

“The building is now 90 per cent restored to its original appearance.”