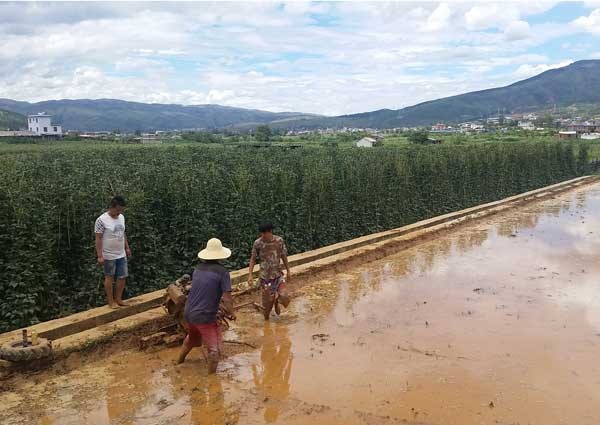 Farmers tending to their field in Shiliuba village in southwestern Yunnan province, China. Shiliuba farmers have suffered from soil pollution and are not able to grow crops as well as they did a decade ago.
The Straits Times

SHANGHAI - China will fine polluters as much as 2 million yuan (S$407,387) for dumping untreated contaminants into the soil, according to a new draft law submitted to the country's parliament, the official China Daily reported on Friday.

After years of overmining, unregulated industrial discharges and excess use of pesticide and fertiliser, China has promised to take action to tackle polluted soil, although the environment ministry has warned that clean-up efforts will be slow and costly.

As well as spelling out punishments for offenders, the new law will make state funds available to support clean-up projects and establish a nationwide monitoring network, China Daily said.

The environment ministry said on Wednesday that China allocated a budget of 14.6 billion yuan to cover soil remediation projects over the past year, but with 3.33 million hectares (8.2 million acres) of contaminated farmland already identified, the total bill could reach as much as 1 trillion yuan.

The draft law also allows authorities to establish "priority protection" areas and ban grazing or the growing of certain crops in heavily polluted regions, as well as encourage crop rotation, reforestation and the creation of wetlands, according to the official People's Daily.

It will also enable authorities to ban construction projects around schools, hospitals or residential areas in order to mitigate potential pollution risks, the People's Daily said.

The standing committee of China's parliament, the National People's Congress, is currently in session and will also deliberate on amendments to water pollution legislation aimed at cracking down on those caught tampering with monitoring data.