The video of a woman surnamed Yang chained to wall by her neck has sparked debate in China about human trafficking.

China’s Ministry of Public Security launched a year-long campaign on Tuesday (March 1) to tackle the trafficking of women and children, the subject of national fury since a video of a mentally-ill woman chained in a dirty shack by her husband went viral.

The ministry announced it would mobilise everything in its power – including police and the departments of civil affairs and health as well as women’s federation organisations – to tackle the issue.

The main targets for the campaign are women and children whose origins are not known, such as people who are homeless and beg on the street, those who are mentally impaired, mentally ill or who have disabilities.

The ministry’s campaign begins at an especially critical time in China, just three days ahead of the annual session of the National People’s Congress , the national legislature, in Beijing this Saturday.

Fan Yun, an NPC representative, proposed that buyers should be punished equally to traffickers. Current criminal law dictates that buyers are liable for a three-year maximum jail term, which is much more lenient than traffickers who face a jail sentence from five years to life imprisonment, or even the death penalty.

Jiang Shengnan, a deputy to the NPC, proposed that anyone involved in detaining, coercing or abusing a victim should be considered complicit in the abduction, trafficking and buying. Anyone who hinders the rescue of human trafficking victims should also be prosecuted, Jiang said. 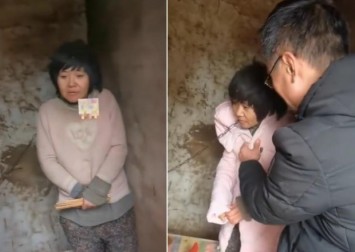 The campaign coincides with renewed awareness of human trafficking for many people in China, sparked by the emergence of a controversial video showing a woman shackled in a shed in cold conditions

The video first surfaced online in late January but it took several weeks and repeated denials from the local authorities in Feng county, eastern Jiangsu province, until officials finally acknowledged that the woman in the viral video, surnamed Yang and a mother of eight, was a victim of human trafficking.

One of the main strategies of the campaign is called the “One million police entering ten thousand homes” in Chinese, indicating plans that involve throngs of officials going deep into communities – including families, villages, welfare institutions and rescue management agencies – to get a clear picture of the situation on the ground.

“It is necessary to establish and improve the reporting mechanism, and widely mobilise the masses to expose and report clues related to abduction,” the ministry said.

A teleconference on Wednesday discussed how to organise and deploy various national public security organs. The campaign will run until the end of this year.