China is on track to approve its first drug for Covid-19, possibly within weeks.

This comes as Chinese scientists race to find an effective treatment for the disease, crucial for the country with a zero-tolerance strategy before it can consider reopening its borders, even as vaccination remains a priority.

Conditional approval may be given to a neutralising monoclonal antibody treatment co-developed by Chinese and US researchers by the end of the year, according to an official publication of the Ministry of Science and Technology.

Brii Biosciences, a multinational pharmaceutical firm based in the US and China, developed the therapy with scientists at Tsinghua University and the Third People's Hospital of Shenzhen, Science and Technology Daily reported on Monday.

Monoclonal antibodies are laboratory-made protein molecules that can act like human antibodies.

The Brii Bio treatment combines two neutralising monoclonal antibodies, BRII-196 and BRII-198, created by cloning and combining antibodies found in recovered patients in China. The combination therapy has to be administered by infusion.

Brii Bio applied to Chinese and US drug regulators last month after phase three trials delivered promising interim data. The company was seeking conditional approval in China and emergency use clearance in the US, public relations director Summer Li said.

"We hope the Chinese regulator will approve it by the end of this year," Li said.

Interim data from an international trial showed the medication could reduce the risk of hospitalisation and death for Covid-19 patients by 78 per cent, Brii Bio said  earlier this year.

If approved, the company would first target the China and US markets, while it would also prioritise countries where it has held clinical trials, including Brazil, South Africa, Mexico, Argentina and the Philippines.

The interim results also showed that the drug was effective against Covid-19 variants such as Delta.

The treatment had already been administered to more than 800 patients in China, Li said.

Meanwhile, China National Biotec Group (CNBG), a subsidiary of state-held Sinopharm, is developing two Covid-19 drugs, one based on human immunoglobulin and the other monoclonal antibodies.

Clinical trials for the former would be carried out in the United Arab Emirates and results were expected to be available within a year, Zhang Yuntao, vice-president and chief scientist at CNBG, told state broadcaster CGTN last week.

China had earmarked 315 million yuan (S$66.7 million) for 53 research projects on developing Covid-19 drugs and therapies since the pandemic broke out almost two years ago, Science and Technology Daily reported.

So far the Chinese front runners are antibody treatments, which have to be applied through infusion or intravenous injection. The United States have already approved several monoclonal antibody medications.

Pfizer said its Paxlovid pill can cut hospitalisation and death by 89 per cent, while Merck said its molnupiravir drug can reduce the same by half. 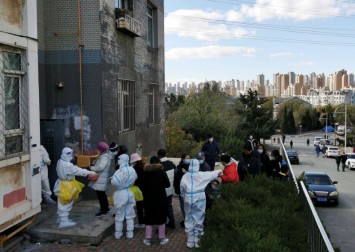 Specific criteria spelt out by Zhong for a return to pre-pandemic normal included keeping the case fatality rate at 0.1 per cent and the coronavirus' reproduction number within the range of one to 1.5.