China pushes for closer ties in Asean talks, with focus on pandemic

A worker unloads a box of Sinovac Biotech's CoronaVac vaccines from a Chinese military aircraft at Villamor Air Base in Pasay, Metro Manila, Philippines, Feb 28, 2021.

China was expected to seek closer ties with the 10 Asean members during talks on Monday (June 7), including pledges to boost cooperation on economic recovery from the pandemic and on Covid-19 vaccine distribution.

At a separate meeting in the city, senior officials agreed to resume negotiations “in suitable formats” on a code of conduct for the South China Sea , Vietnam’s foreign ministry said in a statement.

Tensions over the disputed waterway have long been an issue between China and its Southeast Asian neighbours and a proposed regional code of conduct has been delayed.

Indonesian Foreign Minister Retno Marsudi told reporters after the ministers’ meeting that Asean and China “must immediately” continue talks on the code, noting that “progress is currently very slow”.

“We hope that these negotiations will end quickly with effective and substantive results,” she said, adding that Indonesia was ready to host a meeting in Jakarta “in the near future”.

“Our ability to manage the South China Sea will be a test for Asean-China relations,” she said.

Retno also said she hoped for more cooperation with China to tackle Covid-19. 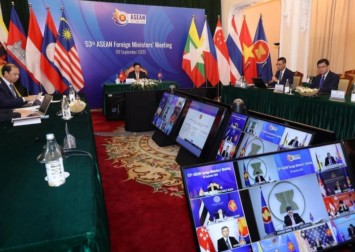 China’s foreign ministry on Sunday said the pandemic and its economic fallout would be high on the agenda at the talks, along with “pragmatic cooperation” and joint efforts for regional peace and security.

During a bilateral meeting on Monday with Erywan bin Pehin Yusof, Brunei’s second foreign minister, Wang said China would continue to “cooperate with Asean … and jointly encourage parties in Myanmar to carry out political dialogue under its constitution and legal framework to continue to push forward its democratic transition process”.

China has stepped up engagement with countries in Southeast Asia, a strategically important region that has emerged as a key battleground for influence between Beijing and Washington, whose rivalry has intensified across geopolitics, trade, technology and security.

And in December, the Asean members, China, Japan, South Korea, Australia and New Zealand signed one of the world’s largest regional free-trade agreements – the Regional Comprehensive Economic Partnership , or RCEP – which observers have said could further cement Beijing’s economic influence in the region.

Xu Liping, an expert on Southeast Asia with the Chinese Academy of Social Sciences, said Beijing was likely to push for broader cooperation that went beyond traditional areas. 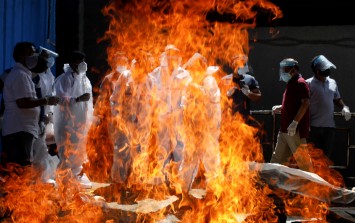 That could include “efforts to reconstruct the supply chain and industry chain under the RCEP so as to build a stable system in the region”, he said.

Monday’s talks come as some Southeast Asian nations are grappling with a spike in Covid-19 infections. Malaysian Foreign Minister Hishammuddin Hussein was unable to join the meeting, sending his deputy in his place, because he is in quarantine as a close contact of a positive case.

Some of the Asean members – Cambodia, Laos, the Philippines, Malaysia and Indonesia – were among the first countries to start using Chinese vaccines , while others have allowed their use after they received World Health Organisation emergency approval.

Despite their closer economic ties, diplomatic relations between China and its neighbours are complicated by tensions over the South China Sea.

Beijing’s claims to most of the resource-rich waterway are contested by Asean members Vietnam, the Philippines, Malaysia and Brunei. Last week, Malaysia summoned China’s ambassador after PLA aircraft were seen in contested waters off its coast .

Xu said Asean was likely to maintain neutrality on the issue.

“Taking a side would definitely put Asean’s interests in jeopardy,” Xu said, adding that Asean would try to keep a distance from the rivalry between China and the US.