Taiwan said 25 warplanes from the mainland entered its air defence zone during its annual military drill which ended on Friday.

Beijing is likely to step up its military activities to deter Taiwan while retaliating diplomatically against the US if the island’s de facto embassy in Washington gets renamed, but these countermeasures are likely to be limited, diplomatic and military observers said.

The Biden administration has reportedly been considering a Taiwanese request to change the name of its mission in the US capital from the Taipei Economic and Cultural Representative Office (Tecro) to the Taiwan Representative Office, which could be received by Beijing as a serious insult if it went ahead.

Beijing has “lodged solemn representations” with the US and urged it to abide by the one-China principle, a policy that confines foreign states to choosing between Beijing and Taipei to establish formal diplomatic ties, with no allowance for dual recognition.

The one-China policy is a result of the Chinese civil war that ended in 1949, leaving mainland China and Taiwan in a military stand-off until now. Washington switched its official diplomatic recognition to the Beijing government in 1979 and cut official ties with Taipei. And thus, the Tecro was launched to serve as the de facto embassy for the two sides to maintain close – but unofficial – links as well as arms sales.

Yue Gang, a former PLA colonel, said that since Beijing had always insisted it reserved the right to use force to bring the self-ruled Taiwan into its fold, military pressure on the island would escalate.

Taiwan, which concluded an annual military drill the same day, said 25 warplanes from the mainland had entered the zone since the Han Kuang exercise started on Monday. 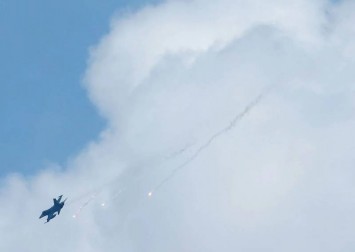 “Certainly, we would not spare Taiwan from punishment if they did change the name of the mission, because the Taiwanese independence forces initiated it through intense lobbying and promotion, to cater and facilitate the anti-China atmosphere in Washington,” Yue said.

The mainland measures could include bigger-scale drills in the Taiwan Strait and around the island, and an increased number of sorties and greater frequency of PLA air force flyovers across the median line of the strait – a de facto military demarcation that has been frequently crossed by the PLA since last year – and even get closer to the island’s immediate airspace – “their psychological red lines to break”.

“But it’s unlikely we would enter the airspace, because our goal is to put them under mental pressure, not to start the war just yet,” he added.

Hong Kong-based military commentator Song Zhongping quoted The Art of War, saying war would be a matter of life and death, and not a simple move to make.

“To use military means to solve the Taiwan issue would be a last resort, so all military activities are preparations,” he said.

If the US did agree to the name change, Beijing would retaliate against the US by ceasing to cooperate on issues such as climate change or dealing with the Taliban in Afghanistan , according to Wang Kung-yi, head of the Taiwan International Strategic Study Society, an independent think tank based in Taipei.

“China is not going to bear with it … and would even do whatever it could to up its ante in the East and South China [seas],” Wang said.

In a precedent, Beijing recalled its ambassador to Lithuania last month after the European nation allowed the island to open a de facto embassy, using the name “Taiwan”, the first country with formal diplomatic ties with Beijing to do so.

But Lu Yeh-chung, professor of diplomacy at National Chengchi University, said recalling the ambassador to the US would be a difficult decision because downgraded bilateral ties “could take years to recover”.

“Beijing has hoped to turn a new page in its relationship with Washington and, compared with Trump’s policy, it has found Biden’s relatively more acceptable, and does not want to sour China-US relations further,” Lu said.

He added that Chinese President Xi Jinping might need to focus on the Communist Party’s 20th Congress next year, therefore would not want a seriously damaged China-US relationship to become a distraction.

Lin Yu-fang, a former lawmaker of the major opposition Kuomintang in Taiwan said that, given the sensitivity of the issue and Biden’s attitude in trying to amend ties with Beijing, whether the name changing proposal was possible was “something worth pondering”.

“In the big picture, Biden and his government have never said they would revoke the one-China policy, which they have stressed would remain as the baseline in US dealing with mainland China,” Lin said.