Chinese health authorities have stepped up efforts to encourage more people to get the Covid-19 jab.

The China CDC says Covid-19 vaccines are safe for those with a history of allergies, including to medications like antibiotics, as health authorities try to encourage more people to get the jab.

“Some people are allergic to pollen, some have rhinitis – it’s what we call an allergic constitution and not related to what’s present in vaccines. They are not listed as contraindications to the Covid-19 vaccines,” An Zhijie, an official in charge of immunisation with the Chinese Centre for Disease Control and Prevention, told state broadcaster CCTV on Monday (April 5).

“The current vaccines do not contain antibiotics and therefore this is not a contraindication,” An added.

Although China began its Covid-19 vaccine roll-out in July, the first country to do so, it now lags behind other nations with fewer shots administered per capita. Nearly 142 million doses had been given by Monday, or about 10 for every 100 people.

That immunisation gap puts the prospect of reopening borders in doubt, and Chinese authorities are keen to catch up – especially with the 2022 Winter Olympics , to be held in Beijing and neighbouring city Zhangjiakou, only about 300 days away.

China is ramping up vaccine production and education campaigns in the hope of getting 40 per cent of the population, about 560 million people, inoculated by June and has set a target of 80 per cent to be vaccinated by the start of next year at the earliest.

Official guidelines issued at the end of last month no longer list some contraindications for Chinese Covid-19 vaccines included when they were first approved for emergency use in July.

In terms of allergies, only people with a history of serious reactions to vaccines or products used in them are advised not to get immunised under the latest guidelines.

An said the rate of allergic reactions to Covid-19 vaccines was “not high”, with rashes that clear up quickly the most common.

According to the latest guidelines, it is also safe for people with compromised immune systems and serious respiratory or cardiovascular diseases to get the Covid-19 jab.

Chinese authorities have stepped up efforts to boost vaccination, including a major campaign in the capital Beijing. 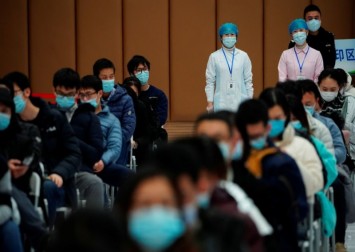 In the eastern Dongcheng district, a sign reads: “Taking the Covid-19 vaccine is every citizen’s right, obligation and responsibility.” It says people with diabetes, high blood pressure, heart stents, only one kidney, and aged in their 90s have been inoculated with no problem, imploring residents to “please believe in the science”.

Residents in Beijing have also been offered incentives ranging from eggs to supermarket coupons as a reward for receiving two doses of a Covid-19 vaccine.

And local authorities in some districts have begun publicly shaming companies and housing complexes with low vaccination rates.

In central Xicheng district, coloured plates are given to the management of buildings to display their inoculation rates, with green indicating 80 per cent of residents or workers have had the jab, orange for 40 to 80 per cent, and red for a rate below 40 per cent, Beijing Daily reported on Monday. Buses have also been converted for use as mobile vaccination sites in the district.