China says it summoned US ambassador, calling for halt to Hong Kong bill

Protesters wave US national flags as they march from Chater Garden to the US consulate in Hong Kong on September 8, 2019.

China's government said on Tuesday that it summoned US ambassador to Beijing, Terry Branstad, to protest the advancement of legislation that would pave the way for economic sanctions against Hong Kong, vowing "consequences" if the bill becomes law.

In a second such move in less than a week, Chinese Vice Foreign Minister Zheng Zeguang "lodged solemn representations" with Branstad over Congress' passage of the Hong Kong Human Rights and Democracy Act, according to a ministry statement.

The meeting occurred a day after a landslide victory by Hong Kong's pan-democrats in district council elections that were seen as a strong rebuke of Hong Kong's embattled leader Carrie Lam Cheng Yuet-ngor.

The ministry's announcement also came amid accusations by China's official media that Western countries had been instigating pro-democracy unrest in the city.

The US legislation "disregards the facts, refers to the deer as a horse, condones and supports the violent crimes of the chaotic anti-China forces, and seriously violates the basic norms of international law and international relations", the ministry said in an announcement.

"The Chinese side strongly urges the US to recognise the situation, immediately correct its mistakes, prevent the above-mentioned Hong Kong bill from becoming a law, and stop any words and deeds that intervene in Hong Kong affairs and interfere in China's internal affairs", according to the announcement.

"Otherwise, all the consequences arising therefrom must be borne entirely by the United States."

In an announcement issued last week, after the bill was passed unanimously by the US Senate, the Chinese foreign ministry said Foreign Vice-Minister Ma Zhaoxu had summoned William Klein, the US embassy's minister counsellor for political affairs.

"China will take strong opposing measures, and the US has to bear all the consequences," last week's statement said.

The US State Department did not confirm the meeting between Zheng and Branstad or comment on the legislation. 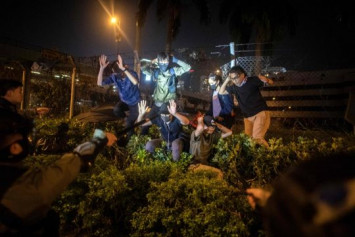 "The United States believes that Hong Kong's autonomy, its adherence to the rule of law, and its commitment to protecting civil liberties are key to preserving its special status under US law, as well as to the success of 'one country, two systems' and Hong Kong's future stability and prosperity," a State Department spokesperson said when asked for details about the meeting.

"As the United States Government has said repeatedly, the Chinese Communist Party must honour its promises to the Hong Kong people, who only want the freedoms and liberties that they have been promised in the Sino-British Joint Declaration, a UN-filed treaty," the spokesperson added.

After passage in Congress last week, US President Donald Trump has until December 2 to sign the Hong Kong act or veto it.