Shanghai man receives massive fine for trimming tree he planted outside his home.

A massive 144,200 yuan (S$32,000) fine meted out by the Shanghai authority to a retired man who trimmed his own tree has shocked China.

The 73-year-old man, surnamed Li, was punished after he hired workers in January to trim a camphor laurel tree he bought two decades ago which he planted in the residential community he lives in.

He was told by the authority he had violated greenery regulations by cropping the tree without obtaining the government’s approval and the cut was too drastic, CCTV reported on Sunday (Aug 22).

“I do not understand this heavy punishment,” Li said in the report. “I didn’t want to cut it at all. This is the tree I bought and I didn’t have the motivation [of cutting it down]. I love trees, so I bought this tree.

“My intention was to trim it to make it shorter. Therefore I don’t need to fix it in the next couple of years,” he said.

Li, a retired middle school teacher, bought the seedling in 2002. At first, he planted it in the yard of his villa in the suburban Songjiang District. He later replanted it in a public place near his estate 10 years ago as its branches and leaves were blocking his windows.

The tree continued to grow and its wide-spreading branches and leaves were so luxuriant that they had prevented the flowers Li planted nearby from receiving sunlight. Li said this forced him to decide to trim the tree.

Officials said although the tree is two metres tall and is still alive, Li’s action is deemed as “cutting”, instead of “trimming”. It is because the tree – at the current height – can not resume its crown shape within a growth cycle, they said.

According to a 2006 Shanghai greenery management rule, this camphor tree, whose diameter measured at nearly 40cm, is valued at 28,840 yuan (US$4,443). Perpetrators who cut this kind of tree shall be fined five times of its value. 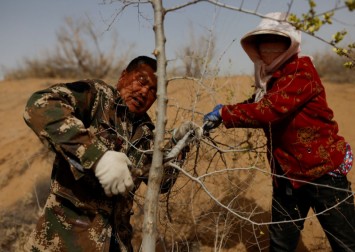 “I love flowers and trees. I love nature. However, I ended up being punished for damaging the tree,” he said in the TV programme. “I feel quite wronged and I am also helpless.”

Li said before he trimmed the tree, he had called the authority to check if he should go through any application procedures. However, officials told him they don’t handle applications from individuals.

It’s not clear whether Li’s case is the highest fine of its kind in Shanghai. It is the first case to receive wide attention in the past decade.

“Which one has brought bigger damage? Trimming one’s own tree or punishing people rigidly without taking their specific situation into consideration?” Bai Yansong, a news anchor on CCTV, asked during the programme.

“Maybe various parties involved in this incident should give better explanations because it is a good urban administration case,” said Bai.

Li’s experience has been viewed 130 million times on Weibo since it was released on social media a week ago. Around 10,000 comments have been left on the website.

“It’s too serious a punishment. I can only accept a fine of hundreds of yuan,” wrote one person.

“Can the government give a verbal warning for a first-time violation? After all, not everybody knows the said regulations,” another comment read.