China's celebrity quadruplets lifting their family out of poverty

A poverty-stricken couple struggling to raise their family of four identical daughters in northwestern China has enjoyed a change in circumstances, thanks to China's live-streaming industry.

Zhao Jianhua and his wife, who have been dependent on government support since the birth of their cute quadruplets in 2014, began broadcasting the daily lives of their daughters on a number of live-streaming platforms a year ago.

The sweet and funny moments shared online from the daily lives of the four little girls has turned them into web celebrities, with more than 2 million followers on TikTok and more than 1 million on Kwai, the two most popular live-streaming platforms in China.

Zhao, who also uses the daily broadcasts to sell farm produce, in addition to receiving cash gifts from internet followers, told online news platform Thepaper.cn that the family was now able to live independently in their village in Xianyang, Shaanxi province.

Thepaper.cn reported on Thursday that Zhao, 33, had volunteered to have his family removed from the list of poor people needing government help.

"We have fans on all kinds of platforms, and we now can live on our own. We're not adding a penny of burden to the government any more," Zhao said. 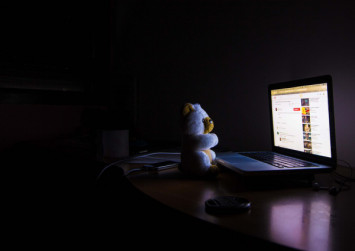 "We used to receive a basic living allowance but we have cancelled that because we can be independent now," he said.

Zhao quit his job to care for his daughters in late 2014 when his wife gave birth to the quadruplets, each weighing only slightly more than 1 kilogram (2.2lbs).

"Four? This is beyond the capability of normal families. It's a big sum of money just to buy formula milk. We had a tough time back then. We were very poor," he said.

They decided to become professional vloggers after his wife shared a short video of the children on a live-streaming app which received more than a million views.

Live-streaming has thrived in China in the past couple of years, with many people using it as a quick way to fame and fortune. Streaming stars can profit directly from followers in the form of "gifts", an in-app currency that is bought with real money, and the top ones can reportedly earn hundreds of thousands of yuan for just one broadcast.

A young man from Hefei in southeastern Anhui province lost his home after spending more than 600,000 yuan (S$120,000) on cash rewards to support his favourite 20 performers on gaming and lifestyle live-streaming platform Huya, local media reported in March last year.