There is a growing awareness among the Chinese public that a good education means very little for many graduates when it comes to the job market.

What qualification does one need to process tobacco leaves and roll cigarettes on a factory floor?

In central China’s Henan province, the job is being done by people with master‘s degrees.

Cigarette manufacturer China Tobacco Henan Industrial Co. has been at the centre of controversy recently because of the impressive qualifications of its newly recruited production line staff.

Nearly a third of the 135 newly enrolled production line workers held a master’s degree, while the rest were all undergraduates, some from China’s high-ranking universities, according to a list published on the website of the State Tobacco Monopoly Administration in April which recently gained traction online.

Just a few months ago, a private school came under the spotlight for similar reasons – all the newly recruited teachers for the primary school under the Shenzhen Nanshan Foreign Language School were master’s graduates from top universities in and outside China, including Columbia University, Tsinghua, and Peking University.

These stories have generated heated public debate amid increasingly fierce competition in the job market as China churns out an increasing number of people with higher education diplomas each year.

A record high of 9.09 million university graduates entered the job market this summer, increasing from 8.74 million in 2020, according to the Ministry of Education.

Over 54 per cent of the Chinese population aged between 18 and 22, the common age for entering post-secondary education, were receiving such an education last year. In 2002, this ratio was just 15 per cent, official data showed.

“This means we have entered an era of popularisation of higher education. More than a half of the young people you run into in the street have a higher diploma,” said Jennifer Feng, chief human resources expert of China’s leading recruitment firm 51job.

The value of their education has been diluted as a result. “Holding a bachelor’s degree is now like an entry threshold for jobseekers,” she said. 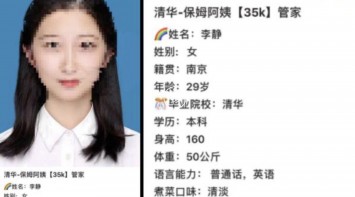 “Many employers have shared experience with me that they originally wanted to hire some undergraduates, but it turned out many graduates applied,” she said.

Liu Haotian, who graduated with a bachelor’s degree in finance from Shanghai Finance University in 2019, admitted that he had to lower his expectations after a year of unsuccessful job hunting.

“What I aimed for initially were financial institutions, but gradually I realised I was not competitive for positions in those places at all. The competitors were all from famous universities or held a higher degree,” he said.

At the beginning of the year, he finally landed a job as a property agent at Lianjia, a leading company in China’s real estate brokerage sector.

“This never occurred to me in the past – how could I do a job that just deals with the sale and rent of homes?” he said.

But he took it anyway since the salary is relatively good compared to other offers he received – a basic monthly salary of 8,000 yuan (S$1,676) plus commission, although he has yet to make a sale.

Liu is not the only university graduate who joined the realty industry in recent years, which traditionally has a low hiring threshold and a bad reputation for fake information and arbitrary charges.

Over 60 per cent of real estate agents in Beijing and Shanghai hold a bachelor’s degree, according to a report released earlier this week by Beike Research Institute, the research arm of Lianjia.

Xiong Bingqi, director of the 21st Century Education Research Institute, said the number of graduates is not the problem, it’s the lack of jobs from the service sector, traditionally the sector which absorbs the most new graduates.

Services accounted for 54 per cent of China’s GDP last year, which is still too weak to generate enough jobs for the number of fresh graduates, he added.

“So when an undergraduate takes a job that used to be done by someone who only finished high school, whether it’s a waste of talent depends on if any value is added to this position,” he said. 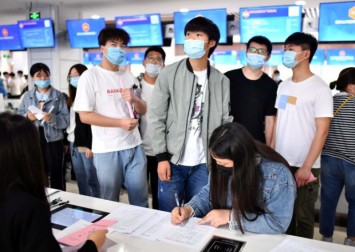 “If he improves the service and makes innovations, then it’s not a waste. Instead, it’s helping the industry to upgrade, and in turn, creating more suitable jobs for future graduates,” he said.

But Liu, the real estate agent, said he did not see how his qualifications would make any difference to his work.

“I think someone with a high school diploma can do this job as well as an undergraduate. It’s more related to what kind of person you are, instead of what diploma you have,” he said.

Asked how much of what he learned in university has been useful at work, he smiled, “none.”