'Cable girl' who crossed river using pulley to get to school returns to remote village to serve after medical school graduation.

A girl from China who once grabbed national headlines by crossing a formidable river using a cable pulley to get to school every day is returning to her hometown to repay her community after graduating from medical school.

Yu Yanqia, a member of the Lisu ethnic minority, nicknamed "cable girl" comes from high up in the mountains of Yunnan province's Nujiang prefecture, southwestern China.

She is the first person in her village to go to university. Now she has decided to return home as a medical worker after she graduated earlier this year, the People's Daily reported.

The young woman became famous in 2007, then aged eight, after being caught on camera by a journalist crossing the Nujiang River near her poverty-stricken home village by sliding on a steel cable attached across cliffs to get to and from school.

"There was wind wuthering beside my ears, waves sweeping and roaring beneath me, and my heart was beating quickly," Yu said of the experience of crossing the river using the cable-slide.

A nationwide fundraising initiative was set up afterwards and a bridge was built over the river the following year using the money raised. Yu and other local children were spared from risking their lives every day just to get an education.

Yu also got to take trips to Beijing and Kunming, the province's capital city, using donations made by charitable people.

Likening the help she received from the public over the years to "lights in the dark", she said she wanted to do the same for others after graduating from Kunming Medical University last month.

She has refused job opportunities elsewhere, and took an offer from the Nujiang People's Hospital near her home, where she will start work in September.

"I just made a decision many people would make, because all along the way I got help from so many people," she said. 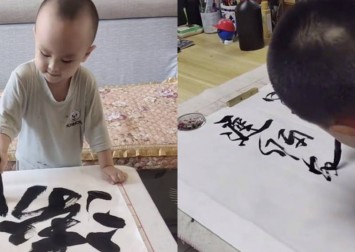 "I hope that together with all medical workers in Nujiang, I can contribute to the development of healthcare services in my hometown," she said.

Yu was one of the many Lisu people who had to use a cable and pulley system as a major means of transport to reach the outside world before the late 2000s.

There have been bridges built across the river since then, but as locals are scattered across the mountainous area, they often have to walk great distances to reach them and will still choose to travel using the cable-slide instead.

Over 40 steel cables have been removed and replaced with 36 bridges across the Nujiang River and two other major rivers in the prefecture since a "changing cable to bridge" project was launched in 2011 by the local government.