A cloned puppy, which was bred using DNA from an award-winning police sniffer dog, has started training with a force in the southwest of China.

Earlier this month Kunxun, a two-month-old female, began training at Kunming Police Dog Base in Yunnan province, according to media reports.

The Kunming wolfdog is China's first cloned police dog and was born after scientists took a DNA sample from a seven-year-old female named Huahuangma, which has won a string of awards for helping to crack multiple cases in the city of Puer.

Since arriving in Kunming, Kunxun has adjusted well to the local environment, the base's project analyst Wan Jiusheng told Science and Technology Daily.

"She is friendly to humans, sociable and alert," said Wan, adding that the pup is not scared of the dark or unfamiliar spaces, has a strong sense of smell and can quickly find hidden food.

The project was carried out by Yunnan Agricultural University and Sinogene, a Beijing-based company specialising in cloning pets and animals for commercial uses, the newspaper reported.

To produce Kunxun, Huahuangma's genetic material was extracted and sent to a laboratory in Beijing. An embryo was engineered using an egg from another dog and implanted into a surrogate mother.

"The surrogate was a gentle beagle. To prevent complications and improve the survival rate, we carried out a caesarean section," Sinogene project technician Liu Xiaojuan told Science and Technology Daily.

Beagles are the standard breed used for lab work by the company, which charges a market rate of 380,000 yuan (S$76,000) for each cloned dog.

It can take years to find a police dog like Huahuangma - she was described by Kunming police dog base as "one in a thousand" - and Sinoegene argued that cloning was a better way than breeding of preserving the genetics of such animals.

In one of her more high-profile cases, Huahuangma helped find a crucial piece of evidence - a hotel key - that led to the arrest of a murder suspect in 2016, the company added.

The cloning programme aims to establish a pool of outstanding police dog specimens.

"Currently, police dog cloning is still in the experimental stage. We hope in the next 10 years, once the technology becomes more sophisticated, to mass clone exceptional police dogs," project analyst Wan said.

Kunxun, whose name contains characters for her breed and "achievement", is currently undergoing basic training for police puppies. 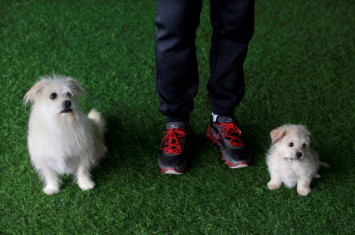 After six months, the young dogs will enter a "university" and trained to specialise in tracking, drug detection, security or evidence detection.

South Korea was the first country to introduce cloned dogs for police or military use in 2007.