Fireworks explode over Tiananmen Square during the gala.

Fireworks lit up the night sky over Tiananmen Square on Tuesday evening, forming "70" and "Long live the people", as more than 60,000 people from all walks of life took centre stage for a gala show.

It was the grand finale in a day of events in Beijing marking China's 70th anniversary - a show of pride and patriotism over the country's rapid rise.

Director Zhang Yimou, the filmmaker who oversaw a spectacular show in 2008 to open the Beijing Olympics, started the evening with a bang.

Fireworks shot up 25 metres to form trees along Changan Avenue as a giant national flag rose slowly above Tiananmen Square.

Fireworks director Cai Guoqiang, who created the huge footprints for the Olympics opening ceremony, also produced red stars, pigeons, smiling faces and blooms of flowers - all met with deafening cheers from the crowd.

The square was festooned with red lanterns, while two giant ribbon-like sculptures in the centre were illuminated, along with its buildings including the Great Hall of the People.

Performers took over the tightly guarded square and Changan Avenue in the heart of the capital, putting on a spectacular show that included patriotic songs and dancing. They held LED screens in sync to create colourful images, including scenery from around China.

President Xi Jinping and other prominent politicians were among those watching the show, and the Chinese leader waved to the crowd as the audience joined in to sing My Motherland and I.

Earlier in the day, Xi gave a bullish speech hailing the accomplishments of seven decades of communist rule and vowing to achieve his vision of a "Chinese dream" of national rejuvenation. It was followed by a huge military parade and a civilian parade.

Unlike the 60th anniversary gala in 2009, when some of China's best-known performers took to the stage - including Xi's wife, soprano singer Peng Liyuan - this year's show featured a huge cast of amateur singers and ordinary people. 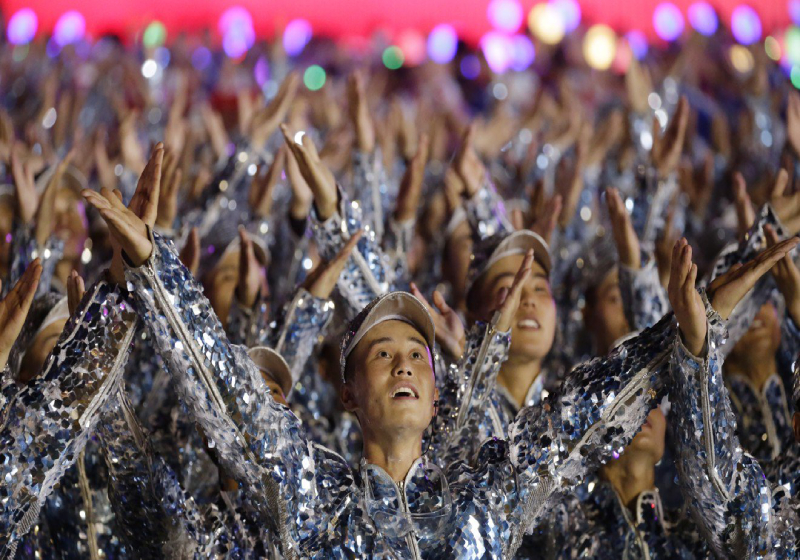 Workers, farmers, couriers, teachers, students and local residents - some of them part of the army of volunteers involved in neighbourhood watch duties - were chosen to take part in the gala across 10 stages set up along Changan Avenue.

Further south on vast Tiananmen Square, a huge symphony orchestra of more than 1,000 musicians performed with a choir made up of 1,400 students ranging from primary school to university age. They were joined by more Beijing residents and martial arts students, who sang and danced.

The show ended with the group singing another patriotic song, Ode to the Motherland, as fireworks over the square spelled out "Long live the people".

For Beijing residents, it has been a long build-up to the all-important anniversary celebrations, with many roads, subway stations and shops closed in the area over the past few weekends while rehearsals for the military parade and gala took place.

Some saw it as a necessary sacrifice. One woman in her 70s, who watched the show on television, said she found it very moving. "I know all these old songs. I dedicated my youth to building this country and sang and danced to these songs," the woman said.

Another Beijinger, in his 40s, said he was impressed by how happy the performers appeared, saying he thought they looked proud about the progress China had made.