Sun Yang's future still hangs in the balance after the World Anti-Doping Agency (Wada) lodged an appeal over his drug testing refusal - which may hand the Chinese star swimmer a lifetime ban if the agency wins.

Swimming website SwimSwam confirmed Wada had appealed to the Court of Arbitration for Sport against Fina's decision to not reprimand Sun, a three-time Olympic gold medallist, over the incident last year.

The CAS declined to provide any further details, according to Swimswam, such as when the appeal hearing will take place, citing the process' confidentiality.

In January, The Sunday Times reported Sun had rejected an out-of-competition doping test at his home in Zhejiang last September and clashed with the testers. It was alleged Sun's mother had ordered security guards to smash a vial of Sun's blood taken in a nearby clubhouse.

The dispute was referred to Fina and at a panel meeting in January, the world swimming governing body ruled in favour of Sun after a 13-hour hearing, stating that the body would "never know" what had happened.

Wada, however, had been claimed to be "furious" over the ruling. They had 21 days following "the last day on which any other party in the case could have appealed" or 21 days "after Wada's receipt of the complete file relating to the decision" to file their appeal. 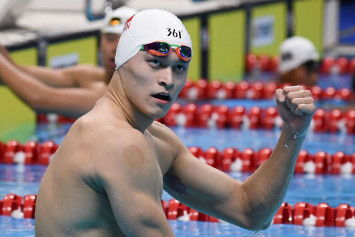 Following The Sunday Times report, Sun's lawyer issued a statement, saying the report was with "a malign intention which severely damaged Sun's reputation and violated his privacy" and they would reserve the right to file a lawsuit against the relevant international media which reported the incident.

The Chinese Swimming Federation also published a statement of support for Sun, backing the defamation claims.

Following the intense public backlash to Fina's decision, the governing body issued a statement saying it "would not consider further speculation or hearsay on the matter."

Sun, 27, previously served a three-month suspension for a positive test for the substance trimetazidine in May 2014. The ban, however, was only announced after it was served to avoid any potential embarrassment of the swimmer during the Incheon Asian Games that summer. Sun won three gold medals at the Games.