A strong, shallow earthquake hit China's southwestern province of Sichuan on Monday (Sept 5) afternoon, the latest challenge for a population battling prolonged drought and a Covid-19 outbreak that has put the capital under lockdown.

The epicentre of the 6.8 magnitude earthquake, which hit at 12.52pm, was near Luding county, about 260km from the provincial capital of Chengdu, the China Earthquake Administration said.

Sichuan, which lies along a major fault line, is among China's most quake-prone provinces.

Monday's quake came as the province grapples with challenges on several fronts.

Authorities in Chengdu imposed a snap lockdown from Thursday evening amid a growing Covid-19 outbreak. Residents were told to stay home, with one person per household allowed out each day to buy necessities. 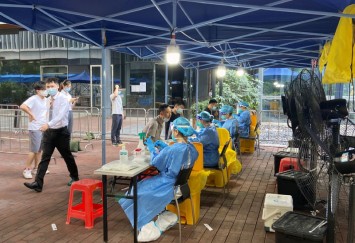 More than 1,000 cases have been reported since mid-August in Chengdu alone, a southwestern transport hub of 21 million.

The province has also been seriously affected all summer as unprecedented drought and heatwaves persisted over vast swathes of China, with farmlands left dry after a month of no rainfall and little to no irrigation equipment available to farmers.