The Horsehead Nebula by embroidery artist Chen Yinghua whose work is so realistic many people mistake it for actual photos of space.

Sitting in front of a wooden rack in her studio in a quiet town in suburban Suzhou, 48-year-old Chen Yinghua was trying to represent a scene when a dark hole swallows a star — with the help of silk threads and a needle.

The first Chinese artist to turn scenes of outer space into traditional embroideries, Chen has amazed people with her delicately knitted celestial bodies that look just like pictures captured by satellites.

From the Milky Way galaxy to the Leonid meteor shower, the woman, who started embroidering as a means of living when she was only a child, has created 27 cosmos-themed pieces since 2006 — with the first taking over six months to complete.

The combination of modern science with the traditional handicraft, which usually features scenic views, people, and animals, has made her an online celebrity after her cosmos-themed works were exhibited at the opening ceremony of China’s Space Day held in Nanjing last month and shared widely on social media.

Born in 1973 in Suzhou, a city in eastern China well-known for the production of silk and traditional embroidery, Chen learned the art form from her mother during childhood, when embroidering machines were still a rarity and most of the local residents made their living from their skills.

The cosmos embroideries reminded her of the numerous starry nights she gazed at with her family when young.

“When I was little, on summer nights I would sit in the yard, look at the faraway Milky Way galaxy and listen to fairy tales from the elders. I didn’t know one day I would put what I saw into embroidery,” she said.

It all began when she met astronomer Mei Bao from the Suzhou station of the Purple Mountain Observatory in 2006.

Read Also
I tried a T-shirt hack to fix overstretched necklines and it works... sort of 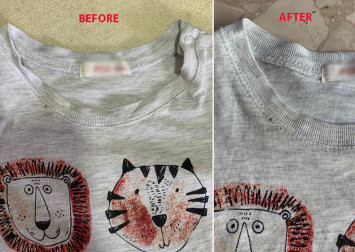 She was shown a series of pictures of galaxies and asked to make them into real artworks, so she decided to give it a try.

Turning the vague shape of images of space into embroidery is not just a simple copycat job, it involves a lot of innovation, she said.

“The first one, the Crab Nebula, took me half a year. Traditional stitches can not show those heavenly bodies so I needed to look for new ways of stitching,” she said.

“Mr Mei has also put a lot of effort into it. We had numerous discussions as I worked on this, taking out stitches when either of us was unsatisfied. Sometimes I was thinking so hard that I didn’t feel like eating,” she said.

She would split the silk thread into strands as subtle as one 64th of the original thread so as to show the precise colour gradations.

So far Chen has made 26 space-themed embroideries, presenting them at various astronomy-themed exhibitions.

Many people from both home and overseas have made offers to buy the dreamlike artworks but she has declined them all.

“They’re like my babies. I spent so much time and effort on them, so I won’t sell them to anyone,” she said.

Having spent her days with a thread and needle for over three decades, Chen said she has never found it dull.

“You’ll need to think all the time as you knit. Sometimes you think this is the right thread, but when it’s put on the cloth it looks different. So you’ll need to remove the stitches and try another one.

“So even if it’s the same person doing the same pattern, she can’t produce two identical embroidery pieces. Each one is unique — maybe this is why hand embroidery is still alive today,” she said.

Suzhou embroidery is one of the world’s oldest embroidery techniques and China’s most distinctive type of embroidery. But the continuation of the art form is becoming a growing concern.

There are still thousands of embroiderers in the city at her age now, but younger ones – those in their 20s – now only number around 100, Chen said.

“It’s not just a technique, but involves many other things, including a sense of aesthetics, line drawing skills, a good understanding of colours, etc,” she said.

Today few families would expect their children to live on the handicraft in the future, which is not considered a profitable trade.

And despite the widespread acclaim for the art form, young people have shown little interest in learning it because it’s a “lonely” job and requires a lot of practice to perfect.

“This is something for people who like being alone. But today there are so many distractions for kids. Barely anyone would be patient enough to sit down and keep knitting,” she said.

Chen said she was happy that her daughter-in-law was an exception — the young lady has devoted herself to embroidery since graduating from university and is determined to make it her career.