Chinese astronauts return to Earth after three months on a space station.

China’s returning “space heroes” emerged from their capsule and waved to the waiting cameras after their successful re-entry on Friday after 90 days working aboard the country’s Tiangong space station.

Speaking to a CCTV journalist at the landing site, Commander Nie Haisheng said he believed there would be more Chinese astronauts to follow their achievements, who would “set new records and reach new heights” in space travel.

The three astronauts who spent a record three months on China’s Tiangong space station landed safely on Friday, completing a journey that set a milestone in the country’s ambitious space programme. “We all feel great,” Nie told the Beijing command centre before leaving the capsule.

Quoting a Chinese proverb, Nie joked with his fellow astronauts that “real gold fears no fire” before their capsule was engulfed in flames as it re-entered the Earth’s atmosphere, broadcast live by state television CCTV.

The ground rescue team’s helicopter arrived at the landing site within minutes of the touchdown, with the “Warrior” all-terrain vehicles close behind. After an inspection of the capsule’s condition, it was opened with medical personnel on hand to conduct a preliminary health check. Each of the crew was assigned two doctors.

This was the astronauts’ first trip to and from the space station. During their three-month stay, they conducted tests, performed maintenance and went on spacewalks. Nie and crew members Liu Boming and Tang Hongbo spent 90 days in space.

A source from the Jiuquan satellite launch centre said the astronauts had also brought back samples from the experiments they conducted during their 90-day mission. “While all the data was transmitted before they left the space station, we still need the samples for further analysis,” the source said.

He said that after medical check-ups and quarantine the astronauts would meet the next batch of astronauts who are scheduled to head for the Tiangong space station in the Shenzhou-13 mission, scheduled for early October.

“The returning pioneers will pass their experiences and brief the successors on the things to note. These are very valuable first-hand experience for the next batch of astronauts to perform their duty.”

The astronauts’ safe return to Earth was the top trending topic on Chinese microblogging platform Weibo, with 290 million hits in the first 30 minutes after landing. Thousands of China’s online community posted messages of support, welcoming back the country’s three “space heroes”, as they are often called. 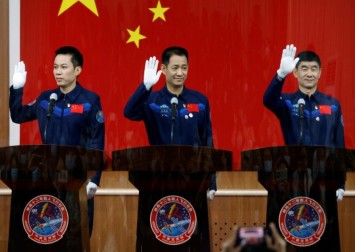 The astronauts, together with their re-entry capsule, were transported to Dongfeng Space City at the Jiuquan Satellite Launch Centre in the Gobi Desert – where they began their space journey three months ago – and will now serve a period of quarantine.

The return mission began at around 2pm on Thursday after they completed radial rendezvous tests, laying an important technical foundation for the other manned missions that will follow.

The landing process started at about 12.45pm on Friday, when the orbit module detached from the return capsule, followed by the propulsion compartment’s detachment at about 1.10pm before it entered the atmosphere.

They came back from 393km (245 miles) above the Earth at a speed of 7.9km (4.9 miles) per second. The re-entry capsule experienced extreme heat and violent shocks when it entered the atmosphere at such high speed, leaving deep scars on its surface.

To lighten the load on the parachute, the special resistant bottom of the capsule was detached at around 10km above the ground to slow the descent.

Sun Jun, deputy director of the Shenzhou flight control centre, told state broadcaster CCTV that the Beidou global positioning system enabled new predictive guidance and self-adjustment systems to be deployed on the return trip, for better control of the re-entry capsule as it entered the communication blackout zone.

The blackout during the spacecraft’s re-entry to the Earth’s atmosphere is caused by an envelope of ionized air around the craft, caused by the extreme heat. On this return trip, the blackout period lasted for about six minutes.

In response to a tweet from foreign ministry spokesperson Hua Chunying announcing the landing of the return capsule, Zhang Heqing, cultural counsellor at China’s embassy in Pakistan, tweeted: “So proud of my motherland, great China! So happy to live in the new era. We’re fully confident to move ahead for the rejuvenation of our nation.”