People are cashing in on the Guangzhou Center for Disease Control and Prevention's offer to buy so-called kissing bugs－dead or alive. The triatomine bugs can spread the potentially fatal Chagas' disease.

"We have now received more than a dozen bugs, both alive and dead, from residents," said Chen Shouyi, director of the section of parasitic and endemic diseases prevention and control department at the centre.

"All the bugs will be sent to the Chinese Center for Disease Control and Prevention for further identification," Chen told news media on Tuesday. 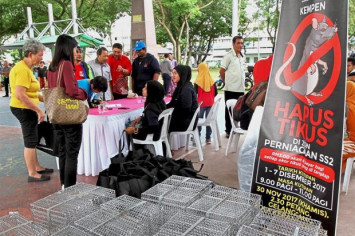 Kissing bugs－which love to bite through the thin tissue of human lips－mainly live in the cracks of walls, wooden furniture and stones, but they have also been found in forests, fields, animal pens and chicken coops. They usually emerge at night to feed. An adult bug can reach 2.5 centimeters in length.

The bugs can also transmit Chagas' disease, a tropical parasitic condition that can be cured in its early stages, when the symptoms include headaches, fever and swelling. In advanced stages, it may be characterized by swelling of the heart or an enlarged colon or esophagus.

Chen said people should wear gloves or use a piece of paper to catch the bugs to prevent infectious bites. They are urged to put the bugs in a sealed transparent container, such as a water bottle, before taking them to a CDC office.

"The campaign will run until the end of July and will help us study how many kissing bugs there are in Guangzhou and how they are distributed," said Chen, who is also an expert in parasitic and endemic diseases.

"The findings will provide valuable data and references for Guangzhou to prevent a possible outbreak of Chagas' disease and offer better treatment to patients in the early stages," Chen said.

"No Chagas' disease cases have ever been reported on the mainland," he said.

Chagas' disease is generally found in Central and South America, which have reported between 6 million and 8 million cases. North America has reported about 300,000 cases.

With increasing globalisation, Chagas' disease has been reported in Europe, Oceania and Japan, Chen said, so Guangzhou, which is known as China's southern gateway, should introduce concrete and effective measures to prevent the outbreak or import of the disease.