The National Medical Products Administration said samples it tested from a batch of intravenous immunoglobulin were free of HIV and hepatitis B and C.

Chinese authorities have made conflicting statements about human blood plasma treatments found to be contaminated with HIV, with the country's drug watchdog saying it had cleared the treatments just a day after its national health authority announced they were faulty.

Inspectors from the National Medical Products Administration (NMPA) said on Wednesday that samples they had examined from a batch of 12,229 bottles of intravenous immunoglobulin were free of HIV and hepatitis B and C.

The administration's clearance of the batch, produced by state-owned Shanghai Xinxing Pharmaceutical Company, contradicted a notice from the National Health Commission on Tuesday announcing its contamination and warning hospitals to immediately suspend use of the treatments.

The batch of 50ml bottles are due to expire in June 2021, a source from the state food and drug regulator told the China Business Journal.

Immunoglobulins are antibodies produced by white blood cells that are used to treat immune deficiencies caused by illnesses such as leukaemia, hepatitis and rabies. 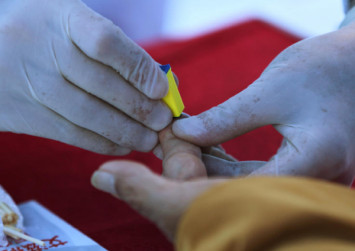 The NMPA - which was at the centre of a major rabies vaccine scandal last July - immediately told regulators in Shanghai to conduct on-site inspections at the pharmaceutical company and sent officials to Jiangxi, it said on Wednesday.

Meanwhile, the Shanghai regulator said in a separate statement that it had halted production at the company, recalled all affected treatments and sent samples for inspection.

This latest blow to confidence in China's health services comes less than a month after it was revealed that 145 children in the eastern Jiangsu province were treated with expired polio vaccines, sparking widespread protests from parents and the investigation of 17 local officials.

Last July, 252,600 faulty rabies vaccines made by Changchun Changsheng Bio-technology, one of China's biggest vaccine firms, were found to have been administered to thousands of toddlers.

In the 1990s, thousands of cash-strapped villagers in China's central Henan province contracted HIV after being persuaded to sell their blood illegally on the black market.

Rapid spread of blood-borne diseases such as HIV and hepatitis B was caused by reuse of needles, lack of screening for diseases, false health records, and mixing of blood before re-injecting the separated red blood cells back into the donors.

The NMPA's apparent clearance of the blood plasma treatments on Wednesday came four days after Wu Zhen, the former deputy head of the China Food and Drug Administration (CFDA) - which oversees the NMPA - was handed over to the judiciary system for investigation by the Communist Party's anti-corruption watchdog in relation to the rabies vaccine scandal. Wu, one of four CFDA officials being investigated, was in charge of China's vaccine regulation at the time.

Changchun Changsheng Bio-technology was handed a 9.1 billion yuan (US$1.3 billion) fine in October after it was found to have fabricated records. The authorities had failed to act immediately after finding inconsistencies in the company's records in late 2017.