A man who threatened to detonate explosives in a 16-hour standoff with police in southwest China was shot dead on Wednesday (June 23).

Police in Guangan, a city of 3.3 million in Sichuan province, said the man, identified only by his surname Ma, was wanted for theft and officers went to his rented flat on Tuesday morning.

He also claimed that he had dozens of kilos of explosives in the apartment.

Police spent the next 16 hours negotiating with the man, who repeatedly threatened to set off an explosion and refused to surrender.

“On-site police officers shot the criminal suspect Ma dead ... at about 3.30 am on June 23 to avoid causing major harm after repeated warnings were made in vain,” the force said in a statement published on Weibo.

During the siege, police evacuated other residents of the apartment block and other nearby residential areas and closed the streets off to traffic.

“The rental flat is located on a busy street with a dense population and numerous stores. We activated the emergency response plan and mobilised armed police, firefighters (and emergency medical staff) to ensure the safety of people’s lives and property,” the police statement said. 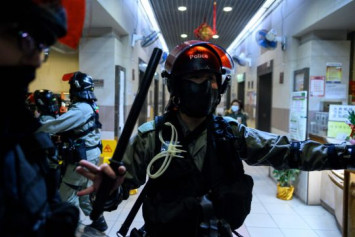 In March, a deadly bomb attack on village officials in the southern province of Guangdong killed five people and wounded five others.

The fatal attack was blamed on a lone individual who was angered by officials’ handling of a property dispute.

In January, a police sniper shot dead a knife-wielding man holding a boy hostage at a school in Kunming, the capital of Yunnan province.

The man had stabbed several children, wounding seven in the attack.

In 2017, a court in Shanghai jailed a man for eight years after he set off an explosive device the previous year at the city’s Pudong International Airport, injuring at least three people.

The court said in a brief statement that the man took extreme measures to “vent his spleen” at problems in his life.