Officials in southwest China launched last Tuesday (Sept 7) a "food court" for migrating elephants after a trekking herd captured the country's and the world's imagination and caused headaches for towns and cities along their route this summer.

The Global Times reported that the idea for the 670,000 square metre food base near Jinghong, in Yunnan province, came after the herd of 15 - originally 17 - elephants left their habitat earlier this year and reached the outskirts of the provincial capital Kunming in June, after a 500km journey.

The area is stocked with food that elephants typically enjoy, such as 38,000 banana trees and saltwater ponds so the animals could get the minerals they require as part of their diet.

"The project is meant to improve the quality of Asian elephants' habitat, enrich their food sources and provide them with more to eat," Cha Wei, an official from the Jinghong's forestry and grassland bureau, told China Daily.

"After the completion of the project, elephants will be able to eat at the base. This can stop them from foraging in villages and damaging farmers' crops," he said.

The base is spread across three different townships in Yunnan. As for the travelling herd, the 15 elephants are currently being guided back towards their home turf.

Last month, they were helped across the Yuanjiang River in Yunnan and a path has been cleared for them as they make the final journey to a nature reserve. 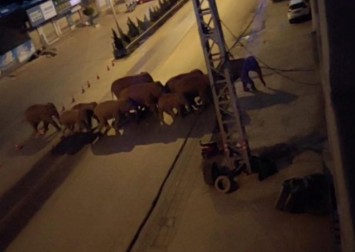 One elephant got separated as the herd travelled north and was already captured and returned to its original habitat in Mengyangzi Nature Reserve, in Xishuangbanna Dai Autonomous Prefecture, in the far southwest of Yunnan province.

It is unclear what happened to the other member of the original 17 as local media reports frequently calculated the herd's size from anywhere between 14 to 17 individuals at various times.

Chinese social and mainstream media were captivated by the elephants as they roamed across the province, and drone and smartphone footage spread quickly online, such as when they were filmed lying down and napping.

The Asian elephant is listed as an endangered species by the International Union for Conservation of Nature's Red List. They have grade one protection status in China. The area surrounding Jinghong is home to about 185 elephants that eat about 200kg of food every day.