A man in northwest China will appeal a death sentence handed down to him after he murdered three neighbours last year to avenge the killing of his mother more than two decades ago.

Live-streaming the sentencing on Tuesday, the court said Zhang followed the family that night as they paid tribute at their ancestral tombs, and fatally stabbed Wang Zhengjun and Wang Xiaojun as they headed home.

Zhang then entered the Wang family compound and stabbed Wang Zixin in the yard until the elderly man no longer moved. 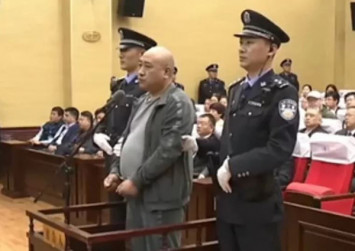 He went home and fetched another knife and two bottles filled with petrol. Zhang smashed the windows of Wang Xiaojun's car, lit a wick in the bottles and threw them into the vehicle, reducing it to ashes.

The Nanzheng district government said in February that Zhang killed his neighbours because he held them responsible for the death of his mother in 1996. Zhang's mother, Wang Xiuping, had argued with neighbour Wang Zhengjun and hit him on the face with a piece of metal.

Wang Zhengjun then picked up a piece of wood and hit her on the head, dealing a fatal blow.

Zhang was 13 at the time and witnessed the incident, the government statement said.

Given that Wang Zhengjun was a minor at the time and the woman had started the fight, Wang Zhengjun was ordered to serve seven years in prison and the family told to pay the Zhangs 9,639.3 yuan ($1,908.08) in compensation.

Zhang's father, Zhang Furu, said he hoped his son could one day be released to care for him in his old age, the online Red Star News site reported.

But another of Wang Zhengjun's brothers, Wang Fujun, who was involved in the argument 22 years ago, said "the murderer must be punished".

"He should be sentenced to death and executed immediately," the report quoted him as saying.