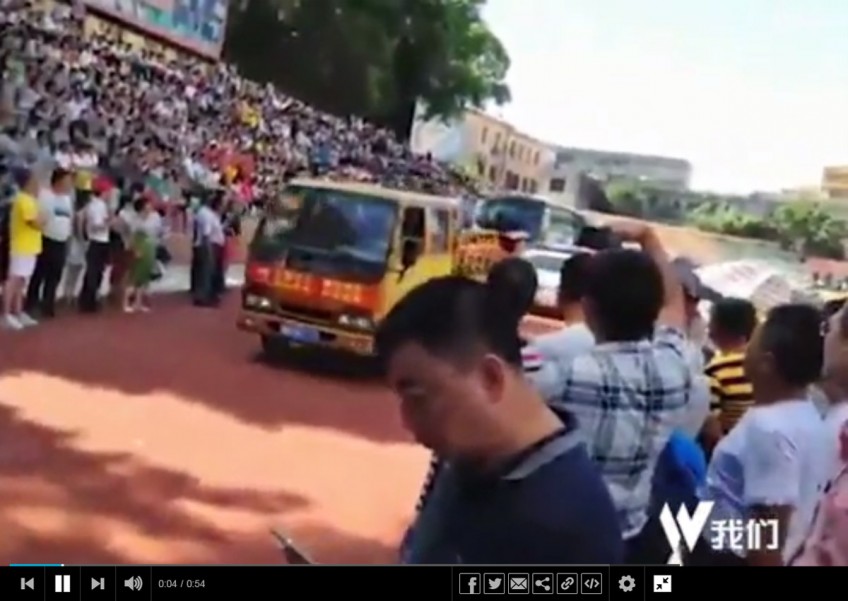 The open hearing was held in Lufeng, a Guangdong county notorious for an ongoing drug problem, where the criminals were convicted of supplying and selling drugs.
Video Screengrab

In a joint court case by the Shanwei Intermediate People's Court and the Lufeng People's Court in China, 13 men and women on trial for drug charges were sentenced to death on June 24 in front of crowds as big as 10,000.

The open hearing was held at a stadium in Lufeng, a county in the Eastern Guangdong province notorious for an ongoing drug problem, where the criminals were convicted of supplying and selling drugs.

According to local media reports, a total of 18 criminals were sentenced and only five were allowed to live.

Out of the 13 slapped with the death penalty, eight were loaded onto trucks to be executed immediately after the trial, although the executions remained private.

Footage of the post-trial scene was included in a report by The Beijing Times which showed the convicts stoically being led away in trucks accompanied by the cries of family members.

According to the South China Morning Post, this is not the first time a public sentencing has been held in Lufeng which has been called a "major drug workshop".

The news outlet also added the the Lufeng court has heard 234 drug-related cases and sentenced 107 people to prison terms of at least five years in 2016 alone.

In 2015, a similar open trial was held where 38 drug dealers were sentenced - 13 of which received the death sentence while the rest received 10-year long prison terms.

Guangdong is China's largest producer of the drug methamphetamine and more than a third of it consumed locally was made in villages administered by Lufeng.

More than 3,000 paramilitary personnel, police and border guards from Guangdong raided a village near Lufeng in 2014 and seized around 3,000kg of crystal meth, according to SCMP. Out of the 14,000 population, nearly 200 people were detained.

Local authorities use public sentencing in a bid to showcase the government's hard line on drugs, reports the Shanghai Daily, and such rallies aim to raise awareness of drug laws and act as a deterrent against drug crimes.

Reactions to such extreme measures have been mixed.

William Nee of human rights NGO Amnesty International condemned the use of mass sentencings and the death penalty as measures that are "tragic and barbaric".

"Despite China continuously executing hundreds if not thousands of people per year for drug-related offences, China is actually experiencing a growth in drug manufacturing and trafficking - which obviously shows the limitations of the 'kill the monkey to scare the chickens' approach," he said in a report by the Daily Mail.

However, a high-school student named Cai Kun who attended the 2015 rally said the rampant drug problem and trading in his hometown of Jiazi was effectively curbed by local campaigns.

"We have seen many wanted posters for drug suspects on local TV. We have also learned that drugs have destroyed a lot of families," he was quoted as saying in the Shanghai Daily.

While the use of extreme preventive measures against drug trafficking remains morally debatable, local authorities have managed to accomplish one of their goals - raising awareness of the drug issue plaguing China.