An online trader from southwest China has been detained for selling fake luxury goods after her mother was spotted using a Louis Vuitton bag to carry pork and vegetables she bought at a local market.

Police in Chongqing said officers patrolling the market late last month became suspicious because the woman's clothing suggested she would not have been able to afford the genuine article, Liaoshen Evening News reported on Monday.

Officers soon linked the case to a complaint they had received the previous day from a woman living in Gansu province, over 1,000km (600 miles) away, who said she had been duped by an online trader based in the city.

The woman had paid 7,000 yuan (S$1,356) for what she believed was a Chanel bag, and said the seller had assured her it was genuine.

But she was disappointed by the poor quality and took it to a local Chanel store, where staff told her it was counterfeit.

She said she had asked the seller for a refund, but was rejected.

Police investigating the case found that the seller had given a fake address and had used a variety of addresses for pervious online deals. 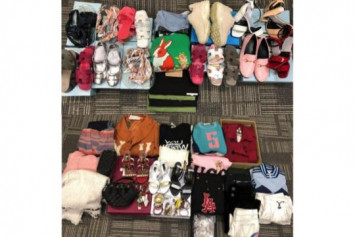 They also found surveillance footage of a man - who turned out to be the seller's father - fetching bags from one of the listed addresses.

When police raided the daughter's home, they found the four rooms contained over 400 bootlegged luxury bags as well as plenty of anti-fake labels.

Police said the 27-year-old, identified only by her surname Wang, had been placed under criminal detention.

This generally lasts for between 14 and 37 days but police did not say how long she would spend behind bars. It also emerged that last year she had been given a suspended jail sentence for fraud.

Officers did not disclose whether any action had been taken against her parents.

In a final twist to the story, it also emerged that the detained seller had been planning to take an exam that would allow her to become a luxury products appraiser.