A Chinese father could not find drugs to treat his son's rare genetic disease, so he decided to make them himself

Despite having only a high-school education, a father in Kunming taught himself how to produce drugs for his son who suffers from Menkes disease.

Then Xu, from Kunming, the capital of southwest China’s Yunnan province, received devastating news: His one-year-old son Haoyang had been diagnosed with Menkes Disease, a rare genetic disorder that typically results in death in just a few years.

The diagnoses transformed Xu, a father with secondary school education, into a fighter trying to stave off a disease that leads to symptoms such as seizures, poor physical development and twisted blood vessels.

“We brought him to see a doctor because of his slow development,” Xu said. “He had the sample taken in February to have a full genetic test and got the result in May. I felt devastated but I couldn‘t give up. How could one give up his own child?”

The 30-year-old tried to find all sorts of solutions to treat his son but, failing to find alternatives, ended up taking matters into his own hands by transforming an experimental treatment in the US into a do-it-yourself home remedy for his son.

Xu is looking for salvation in a chemical element vital for human survival, but that is not top of mind for most people: Copper.

Copper is crucial for developing arteries, bones, the brain and the liver. It is also vital for making hair. One of the symptoms of Menkes disease is unnaturally kinky hair.

Scientists first identified Menkes Disease in 1962. It is caused by a mutation in the X chromosome affecting a gene called ATP7A, which distributes copper throughout the body.

Because the disease results from a disorder in the X chromosome, it is almost universally found in males because females have another X chromosome that can provide a safety net if the disease manifests.

According to the US National Institute of Health (NIH), people with the disease usually die at a very young age, rarely living past 10 years old.

Recently, the NIH said copper histidine treatments have been known to improve the outcome of Menkes disease by helping the body replace the chemical it lacks, but only if treatment begins within 28 days of birth. Histidine is an amino acid.

US-based Cyprium Therapeutics and Sentynl Therapeutics are developing a copper histidine treatment in phase one of clinical trials.

It was granted a “Breakthrough Therapy Designation” by the US Food and Drug Administration in December 2020, meaning that the agency will expedite the approval process because it treats serious diseases.

Xu did not have access to the copper injections, which needed to be administered daily, and border controls due to Covid-19 made it practically impossible to source.

After a failed experimental treatment in Beijing last year, Xu decided it was time to take matters into his own hands.

First, he contacted companies hoping that they could produce copper histidine, but that proved too costly and Xu was told the regulatory approval process would take years.

Undaunted, he began to study, reading American research papers to teach himself how to produce copper histidine.

“I did not go to university, but it doesn’t mean I can’t learn. My son needs me to survive and I will study and try all possible avenues to save him,” Xu said.

“I used translation software because I don’t understand English. Sometimes the translations did not make sense and I would check everything word-by-word. It was complicated, but there were always some clues online,” Xu said.

He signed up for publicly available university courses that allowed him to learn how to make pharmaceutical drugs and ensure quality control.

“It is not as difficult as it sounds. Everything is written in the research and I just need to make sure it is done in a clean environment,” Xu said.

Xu signed an agreement with a company at an industrial plant, which made the drug based on instructions from the research, proving to Xu that the medicine could be made.

But Xu said the agreement was too expensive for the long term and he decided to make the drugs at his own home with 20,000 yuan (S$4,200) worth of equipment.

Xu first injected the copper histidine into rabbits and, after they survived, Xu tested the drug on himself.

Once he thought it was safe, Xu injected a small dosage into Haoyang and worked up to giving the boy the standard dosage.

Then, Xu brought Haoyang to the hospital to ensure his drug did not damage Haoyang’s liver or kidneys. It did not.

While Xu’s decision was driven by love for his son, he operates in an ethical grey area by treating a child with homemade medicine of this complexity.

Local health authorities said they would not intervene as long as Xu kept the treatment for his son.

“Currently, he is making the drug at home and applying it on his own son, so he takes his own responsibility. As long as he does not sell the drugs to others, there is no danger to society. We will not intervene,” an unidentified official with Kunming Health Commission told Zhengguang News .

Zhu Yonggen, a medical lawyer with Beijing’s Jing Lun Law Firm, said, under China’s law, Xu is unlikely to be punished because it would be difficult to establish that he was illegally producing drugs.

Zhu said it is common for people to use homemade remedies to treat loved ones, and Xu should avoid legal problems because he does not appear to have harmed anyone.

“Xu will not be punished by law if there are no serious consequences. What is important is the treatment must be kept to his son only and not be provided to others,” Zhu said.

To mitigate potential legal risks, Xu said he was “creating chemical compounds” and would only create enough to use on Haoyang.

A long road ahead

The copper histidine is not the only drug Xu has produced.

Xu started to make elesclomol, a chemical that triggers cell deaths and is used to fight cancer.

A study published in May 2020 in the scientific journal Science said elesclomol could prevent brain damage and improved the survival of mice with Menkes Disease mice from 14 days to over 200 days.

Like the copper histidine, Xu injected the drug into himself for several days before treating the boy.

Xu has spent 400,000 yuan and countless hours learning how to treat his son and the results for Haoyang have been mixed.

He is over two years old and cannot roll over or speak. He can only eat liquid food as he struggles to swallow. But he is still alive, and Xu said his son would smile when people try to make him laugh.

“The treatment did not make my son better, but it prevented him from getting worse. He spent most of the day lying on his back, but when people tried to tease him, he did smile,” Xu said.

Now Xu is pinning his hopes on gene therapy and gene editing to improve his son’s symptoms.

Read Also
This viral TikTok hack liquifies pills in seconds — but is it safe? 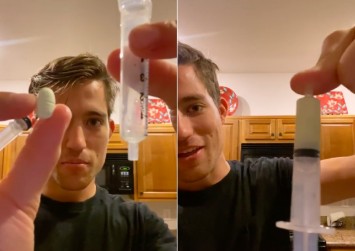 Gene therapy modifies the body’s genes to deliver treatment while gene editing alters the problematic gene itself. Both treatments are controversial in the science and medicine community.

Xu is working on experimental genetic therapy by hiring firms to try to fix the problematic genetic sequence. But he has hit roadblocks from the hefty cost of testing its safety and figuring out how the human immune system might react to gene therapy.

In the US, Cyprium Therapeutics is developing a gene therapy drug for patients with Menkes disease.

While a remote possibility, Xu said he hopes experts would use gene editing to fix the problematic gene, but that is not on the horizon so far.

After his son’s diagnosis last year, Xu enrolled in an adult college entrance exam and is preparing for a university entrance exam. His ultimate goal is to obtain a bachelor’s degree to be qualified for postgraduate studies in genetic engineering.

“There is no such question as whether it is worth it or not. I believe no difficulties can‘t be overcome and hopefully my child can gradually turn better. I just need to go through what it takes,” Xu said.