And the dramatic victory provided some cheer for the nation’s beleaguered football fans, who watched the men’s side limp out of the running for qualification to the Fifa 2022 World Cup on Lunar New Year’s Day.

The topic quickly trended with millions of searches on China’s Twitter-like social media platform Weibo after the game.

Netizens celebrated the women’s team’s triumph – and didn’t miss another opportunity to take a few more digs at Li Xiaopeng’s misfiring men’s team after their humiliating 3-1 defeat by Thailand.

Chinese football in the past week: China men's defeated by Japan 2:0 and Vietnam 3:1 in WCQ. China women's achieved consecutive 2 epic comebacks over Japan and South Korea to win the AFC women's Asian Cup. Chinese netizens use a meme to epitomize the contrast. pic.twitter.com/xajoLJjQUb

“Congratulations to the Chinese women’s football team for winning the championship,” one Weibo user wrote. “At this festive moment, I would like to say something: please expel the men’s football junk from Chinese football, thank you!”

Another user likened the men’s team to a “son who has taken up all his wealth but achieved nothing”, and the women’s team a “daughter who has been wronged but is very hopeful”. 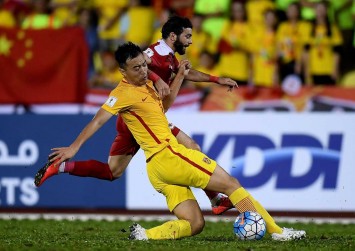 One netizen praised the women’s national team’s ability to “survive in a desperate situation”, their “energy of never giving up” and their “calm and determined spirit”.

“Chinese men’s football, can you be a little girl?” they added.

Other fans hoped the AFC Asian Cup triumph might spark more interest in the women’s game – and earn the players more money.

“Is there a way to make the women’s football team get more money?” a user said.

“Maybe they will hold more club games for women’s football in the future, and then everyone will buy tickets to see their bonuses and worth. After all, how much they get is determined by the market.”