Paramilitary officers have begun backfilling a giant crater at the blast site amid pollution fears.

The industrial park in eastern China where an explosion 10 days ago killed at least 78 people was allegedly set up without a proper planning process, and local officials have been accused of taking bribes in exchange for ignoring the safety risks there.

That's according to an engineer who has worked closely with the Chenjiagang Industrial Park in Xiangshui county, Yancheng, and the Jiangsu Tianjiayi Chemical plant where the accident happened.

The engineer told official newspaper Beijing Youth Daily on Friday that the industrial park was opened in a rush, without going through adequate planning, in 2007 to house heavily polluting factories that had been moved from other areas.

He also said the park's use of trucks to transport natural gas to power the factories instead of a pipeline was a safety risk. 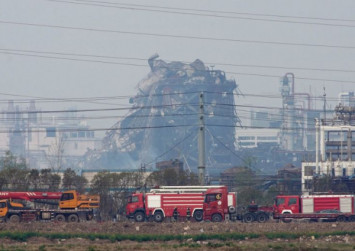 In addition, the park did not have facilities to process solid waste, he told the newspaper. Factories were instead allowed to build incinerators on spare land - some of them located next to gas tanks - in order to meet stricter environmental requirements imposed by the central government in recent years, the report said.

The cause of the deadly explosion at the pesticide factory on March 21 is still being investigated, but some experts have suggested that the force of the blast could be linked to the proximity of an incinerator and a fuel tank that held 4,000 cubic metres of liquefied natural gas.

According to Beijing Youth Daily, the Yancheng government was aware of the incinerator problem because workers and local residents had complained about it. The report said local authorities had fined factories over such issues but then allegedly sought to cover up problems by buying off reporters and residents so that production could continue.

The engineer also accused local officials of turning a blind eye to safety risks at the industrial park after they received bribes, according to the report.

He alleged that officials had introduced "trusted experts" to companies operating in the park, suggesting they use them for consulting work.

"With this complicated guanxi at play, it was hard to have the healthy environment needed for the industrial park to develop," the engineer told the newspaper, referring to the system of social networks and influential relationships which facilitate business and other dealings.

An investigation team from the State Council, China's cabinet, made a preliminary conclusion on the nature of the accident last week, blaming local officials who were "ignorant of their work" for allowing the company to continue its operations despite multiple safety violations. Executives from the plant have been taken into police custody.

More than 300 people injured in the blast were still being treated in hospital on Saturday, according to the latest information from authorities.

The force of the blast left a giant crater - about 170 metres wide and two metres deep - containing toxic chemicals at the accident site, media reports said.

There is now growing concern that the chemicals could contaminate groundwater and pollute the nearby areas. More than 18,000 tonnes of polluted water has been pumped out and transferred to a storage facility, but harmful chemicals remain in the soil, the Yancheng government said on Saturday.

People's Armed Police paramilitary officers have begun backfilling the pit using bulldozers and excavators, and the area will be treated to neutralise the soil, The Beijing News reported.

Xiang Mingqing, deputy commander of the PAP unit, told the Beijing newspaper that it would not be done in a "rush". "The equipment and troops are being deployed and [arrangements will be] adjusted as appropriate," he was quoted as saying.

Photos from the site showed soldiers working without gloves or protective clothing, and using spades to make sandbags by hand.

Days after the explosion, Yancheng mayor Cao Lubao said leaks from sulphuric acid and nitric acid storage tanks had been reported, and dangerous chemicals were being transported to new sites to prevent secondary pollution.