The tearful moment a man is finally reunited with his parents 31 years after he was abducted as a three-year-old.

A man who was abducted as a child 31 years ago was finally reunited with his parents in a celebration which included hundreds of people from surrounding villages in Sichuan province, southwest China.

Qin Yujie - whose given name was Cheng Xueping - knelt and sobbed as he hugged his long-lost parents in Chengjiawan village, surrounded by "Welcome Home" banners and the noise of firecrackers.

"I have been looking for you for years and couldn't find a clue," Qin told his weeping parents Cheng Jiguang and Gaolingzhen at their reunion on Friday, according to the Western China City Daily newspaper.

As well as the joy of seeing their son again, the Chengs were also able to meet Qin's wife and children for the first time as hundreds of people gathered around them, many of them in tears. 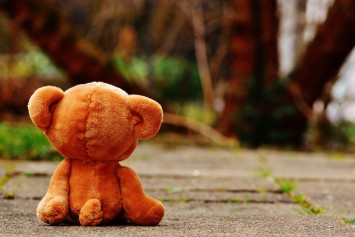 Qin was three years old in 1988 when he was snatched from a construction site in Guizhou province, southern China, where his parents were working. They searched frantically for their son over many hours that day and, since then, have spent their life savings and borrowed money to travel all over China looking for traces of their son.

Eventually they provided DNA samples to a national database established by the police to assist in the search for China's many abducted children.

After three decades they finally learned the truth - that their son had been abducted and sold to a village in north China's Hebei province.

Qin grew up feeling different from the local children in his new home and was aware that he pronounced some words differently. Over the years he came to the gradual realisation that his "father" was not his birth parent and began his search to find out his true origins.

In 2018, a DNA sample Qin provided to his employers yielded an unexpected result. Sichuan police were alerted to a match between Qin's DNA sample and Cheng's, his birth father.

Police tracked him down and contacted the Chengs to provide another DNA sample to be sure of the results and, in February this year, the new test confirmed that Cheng and Gao were indeed Qin's biological parents.

A video of their emotional reunion has been making the rounds on Chinese social media.

The abduction of women and children is a common crime in China. In December 2018 two child traffickers, Zhang Weiping and Zhou Rongping, were sentenced to death for their role in eight separate cases, involving the sale of nine children between 2003 and 2005.

In one particularly brutal case, their gang broke into a rented home, tied up a woman and took away her son to be sold through a middleman, police said. Zhang, Zhou and the other gang members were finally detained in 2016.

In recent years, there have been several official as well as grassroots efforts to help abducted children find their parents. The Ministry of Public Security established an official system called Tuanyuan in 2016 which sends alerts of missing children's information through social media platforms and mobile phone texts, similar to the "Amber Alert" system in the US.

As of May 2018, Chinese media reported the system had published information about 3,053 missing children and helped find 2,980 of them.