The recent move by authorities in Hangzhou, China’s eastern e-commerce hub, to name and shame two popular online influencers for tax evasion and then slap both with hefty fines sent shock waves across the country’s live-streaming sector .

Zhu Chenhui, known online as Xueli Cherie, and Lin Shanshan have now become the unofficial poster girls of this new campaign, which targets the booming live-streaming segment of China’s vast e-commerce market, where there is a spotty track record of compliance with China’s tax laws and regulations. Hangzhou’s tax authority imposed a 65.5 million yuan (S$14 million) fine on Zhu, while Lin received a 27.7 million yuan penalty.

The implications of this tax-focused crackdown are expected to be huge. Live streaming is already the best-paying job for fresh Chinese graduates , according to online classifieds platform 58.com, and a vital marketing channel for many foreign and domestic brands in the world’s biggest e-commerce market .

“[Tax avoidance] is very common not only in the live-streaming industry, but also in other high-income industries,” said Wang Yang, a lawyer at Beijing-based Yingke Law Firm. “If you need to pay 10 million yuan or even 100 million yuan in taxes, you would start thinking about different ways to pay less tax.”

Setting up sole proprietorships to reduce tax is a common tax evasion strategy used in China’s entertainment and live-streaming industries, according to three lawyers interviewed by the South China Morning  Post. Individuals face a tax rate of up to 45 per cent for personal wages and labour remuneration, while the highest tax rate for business income that a person gained through sole proprietorships is 35 per cent.

Zhu, who has more than 15 million followers on microblogging platform Weibo , was fined for converting 84.4 million yuan in personal wages and labour remuneration into income for multiple sole proprietorships that she set up in 2019 and 2020.

That scheme allowed her to avoid paying 30.4 million yuan in taxes, according to a statement by the tax authority in Hangzhou, capital of eastern Zhejiang province and home to e-commerce giant and Post owner Alibaba Group Holding .

Lin, with 9.6 million followers on Weibo, used a similar method to evade payment of 13.1 million yuan in taxes, the tax authority said.

China’s policy on assessment and levy of tax generated by business income has typically been “abused” by live-streamers and television stars to cut their taxes, according to Cui Yanshuang, a partner at Shanghai-based boutique law firm RICC & CO. She said this policy was originally established so that enterprises and individuals can pay a certain amount of tax for business income when there are no clear accounting books available.

“In many places, this policy has become a way to reduce tax, which was not what it was originally intended for,” Cui said.

Beijing has been sharpening its focus on tax evasion in recent months. Earlier this year, controversy swirled around Chinese actress Zheng Shuang after her ex-boyfriend Zhang Heng alleged that she was paid 160 million yuan for one TV show, renewing a fierce debate on wealth inequality on the mainland. 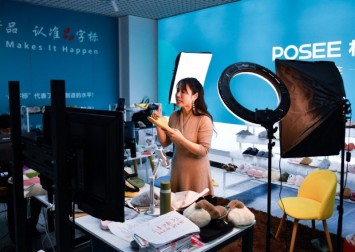 Following an investigation, the Shanghai Municipal Tax Service in August announced that Zheng was fined 299 million yuan for tax evasion. Zhang was slapped with a 32 million yuan penalty for helping the disgraced actress in that scheme.

The tightened enforcement of tax laws is expected to increase the cost for live-streamers, according to another Shanghai-based lawyer, who asked to remain anonymous. She said these live-streaming stars may ask for more payment from companies or they will not be able to provide discounts to consumers for the goods they pitch online.

The lawyer said top-tier live-streamers, for example, have the ability to negotiate their price. She added that the case of Zhu and Lin “sent a warning” that tax rectification looms for the whole industry.

Like what has happened to Big Tech companies, it may be the turn for China’s biggest live-streaming stars to be mindful of Beijing’s tech crackdown. These include top live-streamers Austin Li Jiaqi , widely known as the “lipstick king”, and Viya Huang Wei . In October, these two stars sold nearly US$2 billion worth of goods in 12 hours during the presales campaign for Alibaba’s Singles’ Day shopping festival.

For smaller live-streamers, however, the impact of this crackdown could be limited. “I think [tax avoidance] is common among live-streamers who have made a name for themselves,” said a live-streamer surnamed Zheng based in Yiwu City in Zhejiang. “But for live-streamers like us, we don’t need to do that.”