A grandfather in China unwittingly raised 100,000 yuan (S$20,774) when he left his watermelon cart to return to a farm to raise money for his sick granddaughter.

A 70-year-old grandfather who left his farm to sell watermelons for his three-year-old granddaughter’s cancer treatment accidentally raised over 100,000 yuan (S$20,774) in donations in five days.

The man, surnamed Zhu, typically spent eight hours a day driving a tractor stall around in Zhengzhou, the capital of Henan province in central China, selling watermelons for 20 yuan each.

After his granddaughter was diagnosed with Neuroblastomas, a type of cancer that affects nerve tissues, Zhu realised the watermelon cart would generate insufficient income to help the family pay for medical costs, which doctors estimated would amount to more than 600,000 yuan.

Because his son was working and his daughter-in-law was taking care of the sick child, Zhu realised he needed to return to his hometown of Kaifeng, also in Henan, to try and earn more money by farming.

He ditched his watermelon cart on the side of the street and left a note explaining the situation.

Not thinking much about it, Zhu also included a QR-code on the stall for self-service payment so people could purchase a watermelon for 20 yuan each.

“I will never forget the kindness from all the strangers, and I must try hard to sell the best watermelons to return the goodwill,” said Zhu.

Read Also
This made my day: Mother teaches toddler to wave and blow kisses to migrant workers 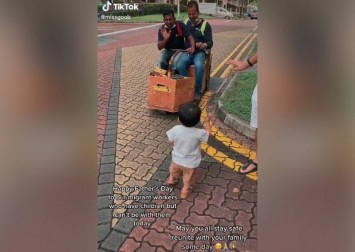 The little girl said: “Thanks for helping me, and please tell my grandpa to take care of himself.”

This story of kindness and compassion spread across Chinese social media, with many people saying the world has more good people than we sometimes realise.

One person wrote on Weibo: “The story made me feel so warm; the world is beautiful.”

Another one said: “It’s the old saying becoming true that ‘Many hands make light work.’”

Last week, the Red Cross organised a charity drive to help a family pay for the 400,000 yuan (US$60,000) treatment for their five-year-old daughter diagnosed with acute lymphoblastic leukaemia.