One man has taken it upon himself to rescue and protect injured and abandoned animals in his own private zoo in China.

Over the past three decades, an 81-year-old Chinese man has been operating by himself a small zoo hosting animals, most of which were saved off the streets or on the way to be slaughtered.

The zoo on Phoenix Mountain Forest Park in Enshi, central Hubei province, is dubbed as the “world’s loneliest zoo” as very few people visit it due to the fact that most of the animals are not healthy, news site The Paper reported.

Luo Yingjiu began keeping animals at home in the 1980s. After seeing wild animals with missing limbs being kept in cages for sale at a food market, Luo bought them out of sympathy. He took them home to give them medical treatment. He released those able to live on their own into the wild while continuing to raise those that could not live independently.

There were so many animals in his house that the local government suggested he open a zoo, by providing him with some financial aid.

The park was opened in 1989, the only one in the city at that time.

During its peak time, the park had some big animals, including a tiger whose tail was cut and a lion with rare hair. 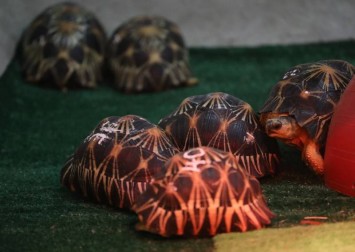 Business later declined since visitors said they were not interested in the zoo’s “old, weak, sick and disabled” animals.

Its ticket price is just 10 yuan (S$2.15), but Luo said he can hardly sell a single ticket a day most of the time.

Using his own pension — about 3,000 yuan per month — to operate the zoo, the octogenarian refused to listen to other people’s advice to shut the facility down.

“It is not just a zoo, it provides the habitat for the animals,” he was quoted as saying. “If the zoo is closed, where can those animals go? They can not even survive in the wild.”

As he operates the park, he keeps on rescuing animals.

A black bear with one paw injured was saved by Luo 17 years ago. When he heard a restaurant bought a bear to cook, he went to tell the restaurant owner that it’s illegal to do that since the black bear is a protected animal in China. He then paid 3,000 yuan to buy the animal and care for it. As a result, Luo had no money to buy food for himself the following month.

“Guai Guai the bear is so miserable to have lost one paw. If a human being loses a hand, he is regarded as disabled,” Luo said.

He often buys cakes for the bear as it is the animal’s favourite food.

A dog named Dianzi was saved by Luo who bought it from its former owner who planned to eat it.

Luo said although Dianzi was young, it had good memories. It remembered its experience of almost being killed, so it didn’t like to see its former owner. Instead, Luo said the dog is loyal to him.

“It comes to check on me two to three times every night to see if I have passed away in my sleep,” said Luo.

A monkey that has been at the zoo for nearly 30 years is almost blind from excessive camera flashes from visitors who took photos.

“It’s so difficult for it to eat food because it can’t see. I need to put the food in its hand or tell it to eat,” Luo said.

For those animals that have died, Luo buried them on the nearby mountain. He said he remembers every animal’s name.

“Animals and humans are born equal,” he said. “We should respect animals’ right to survival and respect their kindness towards this world. We should hold them in awe.”

In January, Luo opened an account on the video-sharing website Bilibili with the help of his granddaughter. He has gained 126,000 followers.

“I am moved to tears. Old Luo is truly an environmentalist,” wrote one commenter.

“I am a native of Enshi and I work in another city. I visited that zoo when I was a little kid. I thought the zoo was cheating us of our money by showing injured animals. I didn’t expect the story behind it to be so touching,” another person said. “Next time I return to my hometown, I will visit the zoo again. I wish for grandpa to stay healthy and hope his situation will improve.”