A man who took a woman's seat on a bullet train and refused to leave has been banned from rail travel for an unspecified period of time, China Railway Jinan Group said on Friday.

Railway police also fined him 200 yuan (S$40), according to the group.

A video posted online showed the man, Sun He, taking a window seat in an economy coach on a train from Jinan to Beijing on Tuesday, and refusing to give it back to the woman and taunting her.

"You have three choices - stand, take my seat or go to the dining coach," Sun told the young woman in the video. According to the tickets, Sun's assigned seat was one row behind the woman's.

When a train attendant came to mediate, Sun claimed he wasn't able to stand and asked for a wheelchair. A railway police officer tried to persuade him but failed, and he was then left alone. The woman was given a seat in the business-class coach. 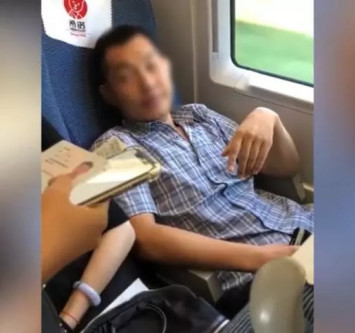 The punishment, released on Friday, came after the incident triggered nationwide anger and online condemnation of Sun's behaviour.

It remains unknown how long he will be banned from rail travel.

But according to a guideline to restrict offenders from train travel for violations, offenders will be banned from rail travel for 90 or 180 days, depending on the violations. Violations include smoking on trains, travelling without tickets, failing to pay surcharges upon arrival, reselling tickets, using a fake ID and disrupting public order or railway safety.

The guideline, which took effect May 1, is part of measures to improve behaviour, toughen sanctions on wrongdoers and enhance public security and order, amid an ongoing national campaign that advocates credibility. 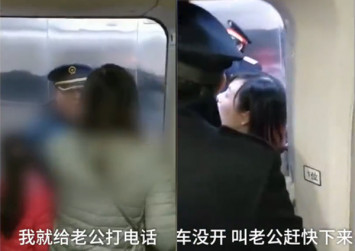 In a case in January, a schoolteacher held open the door of a train to prevent it leaving on time so her husband - who was late - could catch the train. The teacher was then fired from her job.

A woman with a standing ticket took a passenger's seat on a train from Shenzhen to Qingdao on Wednesday, and refused to give it back even though a train attendant tried to mediate. The passenger and her companion were forced to stand for two hours from 4 am to 6 am, the report said.