The Hanyusuchus sinensis is believed to have become extinct just a few hundred years ago.

Could humans have driven a Bronze Age crocodilian species in southern China into extinction just a few hundred years ago?

That is the question being raised as a team of scientists studies the partially fossilised remains of two giant crocodiles unearthed in China’s southern Guangdong province decades ago.

The remains are from a hitherto unknown species of gharial, or fish-eating crocodile, and they also bear the marks of ritual beheading, according to the scientists. Discovered some half a century ago in the Pearl River Delta, the fossils are now preserved in museums in Guangdong.

The animals are believed to have been 6 metres (20 feet) from snout to tail and the top predator in their environment.

Analysis of bone remains shows the two reptiles suffered “vicious attacks” and had been “ritualistically beheaded”, possibly with an axelike weapon, the team said in an article published on Wednesday (March 9).

“Chop marks [and] historical accounts suggest that the human-crocodilian conflict had lasted in southern China from the Bronze Age until a few hundred years ago when this unique species finally became extinct,” the researchers wrote in their article in the peer-reviewed journal Proceedings of the Royal Society B.

“Although the two gharials in the study died long before the Tang dynasty, and thus were not victims of Han, we believe that they were of the same species that Han killed,” Liu said.

The reptilian remains discovered are believed to be from the 14th and 10th centuries BC, whereas the Tang dynasty lasted from the mid-7th to the early 10th century AD.

“The reptiles described in Tang literature were of similar sizes and it would be highly impossible for two similar species to coexist in the same area within the span of around 1,000 years,” Liu explained.

The poet Han was the author of the Proclamation for the Crocodiles, in which he commanded the reptiles to leave southern China for the ocean or risk being killed.

“Let me place this injunction on the crocodiles: Within three days, lead the hideous ilk and betake themselves southward to the sea,” Han wrote. “If they are not gone in seven days … Then they may be killed.”

“The prefect will appoint skilled underlings who will carry strong bows and poisoned arrows to fight with them, and not stop until all are killed. Let there be no regrets.” 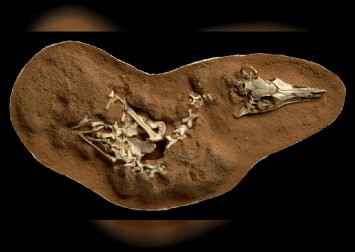 The ancient Chinese “hatred of crocodilians had lasted for at least three millennia since the Shang dynasty”, according to the researchers, who cited “two chop mark bearing specimens from Shang and Zhou dynasties”.

To get rid of the menace, “government officials in the Tang, Song and Ming dynasties resorted to sacrificial rituals and forces in the Han River valley, eastern Guangdong”.

“The range of [the species] would be progressively contracted during the past two millennia, as hotspots of the population associated with intensive agricultural activities emerged in southern China.”

The team said the discovery of the new species, which shares important skull features with the rest of the crocodilian family, supplies a missing link in the evolution of the reptiles.

The team will continue to study the partially fossilised remains, which are recent enough to have some tissue preserved. The genetic material, if successfully extracted, could show how the new species fit into the crocodilian family tree, the scientists said.