The boy, suffering severe stomach pain and fever, was placed in the pediatric ICU (PICU) immediately after being diagnosed with fulminant myocarditis last Thursday evening. The illness is an inflammatory process that occurs in the myocardium, the muscular tissue of the heart, and causes acute-onset heart failure.

After receiving initial treatment, he was in stable condition in the early morning of the next day. However, the situation deteriorated suddenly at around 8:30 am, with development of an irregular heartbeat, with his heart rate slowing down, then convulsions and cardiac arrest occurred.

First aid was given but twice more the boy stopped breathing. Though the patient's condition stabilized later, his life was still at high risk.

Read Also
Couple in China offers to give away daughter to save son with leukaemia, has crowdfunding efforts frozen 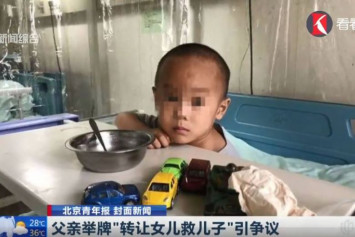 Given the demanding situation, the doctors in the PICU decided to apply ECMO (extracorporeal membrane oxygenation), an advanced technique of providing cardiac and respiratory support, to the boy. At around 1.30 pm, a transport team bringing the machine set out from Shanghai. Just 20 minutes or so later, the boy's condition was deteriorating rapidly.

His blood pressure decreased to such an extent that it could not be detected. Cardiac arrest and breathlessness frequently reemerged. It would take over three hours for the equipment to be brought to Changzhou and no one knew whether the boy would make it through.

The boy's mother fell down in a faint when she heard the news. His father stayed rather calm and was determined to save his son.

"So long as there is a glimmer of hope, we will never give up," the father said.

At 2:50 pm, the boy's heart completely stopped beating while the ECMO machine was still on the way. From this moment on, continuous chest compression was needed to keep him alive.

For such an emergency, the hospital organised 30-odd professionals to perform the task. To guarantee the efficacy of the action, relays were set up, with each person performing the chest compressions for one to two minutes and then resting while another did a set of compressions. Otherwise, a person would tire and the compressions would not be powerful enough.

In this way, the 30-odd professionals tried hard to save the boy until the machine arrived and started working.

By the time the machine was operable at 7:30 pm, health workers had performed over 30,000 chest compressions.

"We are desperate to save every young life that is at risk with all our efforts. The world is not that terrible because we love you in silence," one staff member who participated in the relay posted on WeChat, a popular social networking platform in China.

The boy's heart started beating again in a very weak way and he is still under treatment at the time of this writing.