Accompanied by his two dogs, a young boy starts his three-part journey to school at 5am.

On Valentine's Day, the first day of the new semester in mainland China, an 11-year-old boy left home in the dark at 5am to walk 4km to catch a bus to school, accompanied by his two dogs.

His father, who lives 800km away in Shenzhen, watches from his monitor to ensure his son gets out of the house in time for the bus. When he closes the door, the boy looks at the camera, understanding that his father is looking back.

"We do not talk beforehand, it is our unspoken understanding," Chen Yao, 39, the father and video poster, told the South China Morning Post.

The boy, nicknamed Xiao Teng, or "little Teng", lives in the southern part of Jiangxi province, in the mountainous areas bordering Guangdong. The youngster's journey to school, which is located in a town in Guangdong, is a three-part trek; a 4km walk, an 11km bus trip, and another short walk to the school.

Once at school, the boy lives on campus from Monday to Friday before returning home on Friday evenings to stay with his grandmother and siblings, who study in a secondary school in the same town. Chen's wife also works in Shenzhen.

"The schools in the nearby town in Jiangxi are even more inconvenient, and the education quality is poor," Chen explained. As much as he wants to bring his children with him, Chen said realities prevent him from doing so.

"They do not have a Shenzhen hukou (household registration), so they must return to their hometown for their gaokao," Chen said, referring to China's all-important catch-all exam that students take at the end of secondary school.

"Plus, they are more used to the village life."

What Chen, a forklift driver for hire, did not expect was that the video would go viral. Tens of millions of people have already watched the video through various channels, with many people commenting that the boy's thoughtfulness and understanding moved them to tears. 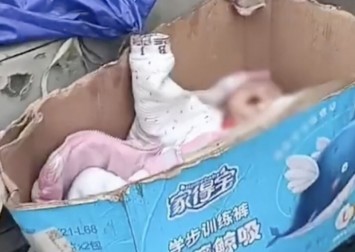 "I hope all children in the world do not have to live like this and can grow up with their parents' companionship," wrote one commenter on Weibo.

The children, much to Chen's relief, are very understanding.

"They'll play 'rock, paper, scissors', and whoever loses will do the chores," he said.

Chen visits them every other month and expresses his love by watching the children from the monitor and posting videos to compensate for his physical absence.

The long commute is reminiscent of "Ice Boy", a schoolchild who became a national touchpoint in 2018 when a video emerged of him arriving at school with frozen hair and cold-touched pink cheeks.

While the photo, and laughter of his peers, created a sense of humour, it was also a visual representation of the hardships faced by China's poorest citizens.

Economic concerns are why Chen, like millions of other migrant workers in China, are incentivised to live away from their families for large parts of the year to help improve their families' lives in the cities.

Chen left home at age 14 to work in Shenzhen after his father died. He and his wife are the only sources of income of a family of seven, including a mentally ill elder brother. Chen's social media profile name translates to "glorious years", which is also the name of a popular song by Beyond, a Hong Kong rock band. "The lyrics of that song are similar to my and my son's fate," Chen said.