Chinese web users have engaged in heated debates over whether a man, who was adopted by others for 34 years, should help his biological mother.

A video published around Sunday noon on Sina Weibo, the Chinese Twitter-like platform, attracted huge numbers of views for featuring a mother who said she could not get help from her son she had sent to others for adoption 34 years ago.

According to the video, the woman surnamed Wang lived in Shaoxing, East China's Zhejiang province, and she had three sons. The one she sent to others for adoption at age 1 was the youngest, because it was an illegal birth at that time.

The woman said her husband died many years ago, and she had suffered brain disease. She had to spend a lot because of her illness and lived a hard life. She found it even difficult to care for herself because of her poor physical condition.

She said she expected to turn to the youngest son for help because her two elder sons had failed in business and the youngest one could earn some 550,000 yuan (S$109,428) a year.

However, when she made some phone calls to the son, he refused to answer. She said that she had no other choices but to seek help from him. She now lives on the money she borrowed from relatives.

A majority of Chinese web users support an opinion that the son had no relationship with the biological parents after being adopted, and even after 34 years, he had no responsibility to support her. 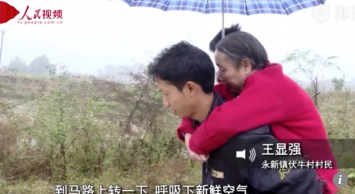 A web user with online name Zhiyunduan said that the mother had sent the son to others for adoption, and any choice by the son is right, including not helping her.

Yujiandoudou520 said that the mother had done nothing for the son but now she expects to enjoy the fruits of someone else's work.

Some web users have also commented that the son should help to some extent because she gave him life.

Shanchengxintu said that the son had to fulfil his filial responsibility and the biological mother gave life to him, something more important than whoever raised him.

Wuxi_Qier said that the son could offer some help due to their biological relationship, but he could make his own decision as they have no relationship.

Wang Huafeng, a lawyer from Zhejiang Qilancheng Law Firm, said that if a child is adopted by others through legal procedures, the relationship between the child and the biological parents is automatically broken.

The child has no responsibility to support the biological parents, Wang said. But if the adoption was not through legal procedures, the responsibility would be unclear under the law, and Wang suggested settling the problem through negotiations.