Chinese passenger goes off the rails after missing train

A woman has been detained after trying to stop a high-speed train from leaving a station in southern China by sticking her foot in the gap between the train and the platform.

The woman, identified only by her surname Wong, arrived at Guangzhou South station at around 11.20pm on Sunday with her brother and a friend and were told they were too late to catch the last train to Changsha South, around 700km (435 miles) to the north.

Wong tried to convince railway workers to let them board the train because she was worried about being late for work the next day, Guangzhou Daily reported.

Footage from the station's surveillance cameras showed that after arguing with staff, the group jumped over the security barriers and ran up to the train.

Wong started banging on the windows, shouting "open the door", before sticking her foot in the gap between the train and the platform.

Railway staff and her companions tried to calm her down, but she refused to listen. 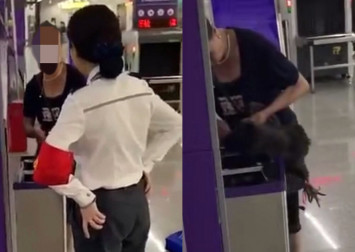 "Get up, the train is about to depart so we cannot open the door. The door won't open!" they told her. "You can still take the next train, get up first."

After a few minutes police were called and dragged her away from the train.

She was given nine days' detention for disturbing order in a public place and impeding the normal flow of traffic, according to online news platform Guancha Syndicate. Her companions were given a disciplinary warning.

Although the train had only been delayed by seven minutes, some web users expressed anger at her behaviour.

"This kind of people should be blacklisted! What about the time of other passengers on the train?" one Weibo user said.

"Now she is late for nine days, she does not need to go to work any more," another wrote.