Chinese police searching for boy, 13, accused of killing parents with a hammer

Police in central China are searching for a 13-year-old boy suspected of bludgeoning his parents to death with a hammer on Monday before running away.

Hengnan county police alleged that Luo Feng attacked his father Luo Jichun, 51, and mother Tan Jinhua, 45, during a dispute on New Year's Eve. The secondary student then fled the scene.

Officers said Luo's older sister told relatives what had happened and they called police. Luo's mother and sister were both said to have mental disabilities.

The couple had died from their injuries by the time police arrived at the scene in Santang, Hunan province. It was not clear where exactly the attack took place.

Luo Feng is described as lean, 1.63 metres tall and was last seen in an internet cafe in Santang wearing a light green jacket, according to a police notice released on Tuesday.

It is the second time in a month that a child in China has been suspected of killing their own parents.

In early December, a 12-year-old boy spent three days in custody before he was released without charge after he admitted to stabbing his mother to death. 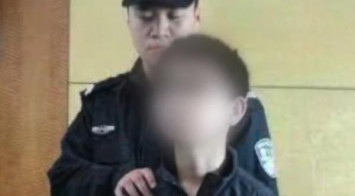 Police said Wu Jiakang attacked his mother Chen Xin, 34, in her bedroom after she had allegedly punished him when she caught the boy smoking. They said she died from multiple stab wounds and that he had initially claimed his mother had taken her own life.

The case, which was also in Hunan province, reignited debate on how to deal with juveniles who commit serious crimes. Police had to release the boy because children under the age of 13 cannot be held criminally responsible according to Chinese law.

His relatives told The Beijing News they wanted the boy to go back to school but it had refused to let him return.