A fugitive killer-turned-kebab-shop-owner confessed to a 19-year-old robbery and murder in eastern China last week after arousing suspicions in an officer dining at the restaurant.

The 38-year-old man, surnamed Ding, admitted robbing a furniture factory in Beijing and killing its owner with two friends in 2000, China News Service reported on Monday.

While on the run, he changed his name and opened a kebab shop in his hometown of Wenzhou in Zhejiang province.

But Ding aroused the suspicion of the officer, Qiu Diancong, as Qiu ate snacks with his police colleagues on May 5, the report said. 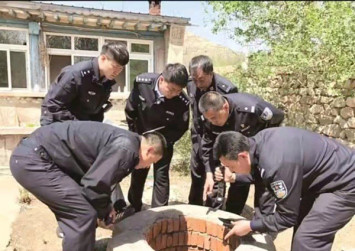 Qiu said the business owner looked like a man on the city's wanted list, and he became more suspicious as Ding avoided eye contact and talking to him.

After he left the restaurant, Qiu followed up on his suspicions. Not only did the man in the diner resemble one of the robbers in the Beijing case, but his name was not on record in the police system.

Qiu was more convinced that he was the fugitive after neighbours described him as reserved, good-tempered, and someone who never argued with others.

The next day, the officers visited the kebab shop to interview Ding but the suspect refused to answer questions. Qiu said they then asked Ding to go with them to the police station, where he admitted his part in the robbery and murder.

Ding said he and his accomplices split up after the crimes and fled to different parts of the country. The others were later arrested and tried, with one given a suspended death sentence and the other a 19-year prison term. Ding, meanwhile, went back to his hometown and started a family after 10 years on the run.