A team from Sun Yat-sen University in Guangzhou says their hi-tech contact lens could be used to monitor and regulate eye pressure before glaucoma surgery and as a bandage after the procedure without blocking vision.

The team from Sun Yat-sen University in Guangzhou said the device could be used to monitor and regulate eye pressure before glaucoma surgery and as a bandage after the procedure without blocking vision.

"The minimally invasive, smart, wireless and theranostic [therapeutic-diagnostic] features endow the wireless theranostic contact lens as a highly promising system for glaucoma treatments," the researchers wrote in an article published in the peer-reviewed journal Nature Communications on Tuesday.

The team said the tests found the device sensitive and reliable when monitoring and regulating pressure in live rabbits and the eyeballs of pigs, which were similar to human eyes.

They said the new device was compatible with existing contact lens mass-production processes, but more research was needed before the product could be tested in clinical trials.

Glaucoma is an eye condition in which the optic nerve that carries information from the eyes to the brain becomes damaged. It is often caused by the abnormal circulation of fluid within the eye which increases intraocular pressure, and can result in impaired vision and blindness.

The number of people with the disease is projected to rise from 76 million in 2020 to 95 million globally in 2030, according to the World Health Organisation (WHO).

The global health agency said the only proven treatment to prevent glaucoma from progressing was to lower intraocular pressure, which could be done with a therapeutic eye-drop regimen, laser therapy and/or surgery.

The Chinese team said that in their device the wirelessly powered drug delivery module could deliver an anti-glaucoma drug into the anterior chamber of the eye - the space between the cornea and the iris.

The delivery is done via iontophoresis, a non-invasive delivery system that uses a low-amplitude electrical current for positively charged drugs to migrate across corneal barriers.

The team said patients diagnosed with acute angle-closure glaucoma - which causes headache, nausea and vomiting - "need to be treated with medicines to reduce intraocular pressure [for about a week] until it is stable and suitable for surgery".

Read Also
Not taking care of your eyes? It can affect your cognitive function 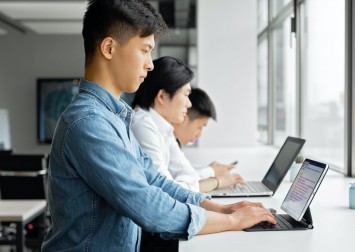 They also said that after laser surgery, blood or tissue residue might block the lacrimal duct that transmits tears from the surface of the eye to the nasal cavity and raise intraocular pressure.

While other researchers have developed contact lens sensing and delivery technologies, having these two wireless functions on one ultra-small surface without interfering with each other was a key challenge, according to the team.

The team said their design separated the channels via different frequencies for the sensing and delivery modules to operate individually.

"This smart system provides promising methodologies that could be expanded to other ophthalmic diseases, which would positively promote the emergence of a new generation of a theranostic system for personalised health management," they said.