A video clip of a brown Alaskan Malamute that served as emotional support animal on a China Southern Airlines flight recently went viral on social media.

A video clip of a big dog sitting in the cabin of a China Southern Airlines flight has gone viral on social media, Jiangsu News said on Thursday.

The brown Alaskan Malamute, which sat quietly in its own seat, was allowed to travel in the cabin beside its owner because it qualified as an emotional support animal, a China Southern Airlines spokesman was quoted as saying. The video was taken last year.

Emotional support animals, which have gained popularity in the West in recent years, must be approved by medical professionals, but no specific training is required for pets to attain such a status.

The animals provide support and companionship for the owner in potentially stressful situations such as air travel. In the US, the owners of emotional support animals must provide businesses like airlines with medical proof of their disability. 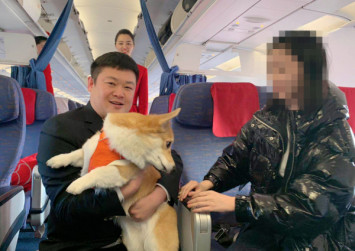 Under usual airline regulations, animals are forbidden from travelling in cabins and must be kept in a pet carrier in the plane's hold.

Airlines makes exceptions for service animals such as guide dogs to travel in cabins with their owner, but the animals need official identification papers and a valid health certificate.

Last year, China Southern Airlines permitted an emotional support dog to accompany a family of five on a flight from Bangkok in Thailand to Wuhan in Hubei province.

Last year, China Southern Airlines permitted an emotional support dog to accompany a family of five on a flight from Bangkok in Thailand to Wuhan in Hubei province.

"Can we also ban those screaming, crying, iPad-clutching kids who watch Peppa Pig really loudly and kick the seats in front of them from flights too, along with their parents?" one Weibo user asked.

"A well-controlled working dog is much better than an out-of-control bratty kid," said another.

A third user was also in favour: "So cute, I support dogs flying in planes."