The driver of a subway train in southwestern China was killed and three other people were injured when it smashed into protective barrier doors on Tuesday night, less than two weeks after the metro rail line opened.

Station staff on the Chongqing rail transit loop line evacuated 30 passengers and took one passenger, who sustained a slight hand injury, and three injured rail staff, including the driver, to hospital.

The front of the train was damaged and the first compartment offset, but not derailed, when it collided with the protective doors protruding on to the track area between two stations, according to the ﻿Chongqing Morning Post. 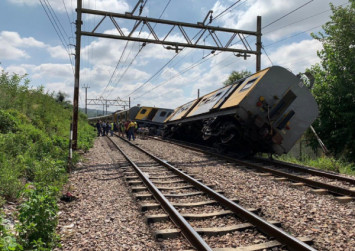 Chongqing's railway transit company said three stations along the affected 4km (2.4 miles) route were out of service, while the rest of the metro loop line was still in operation.

The 34km northeastern section of the Chongqing rail line opened on December 28, 2018 and is still under trial operation.

There are 24 stations in the new section, built with an investment of 22.2 billion yuan (S$4.41 billion), with 17 stations currently open, according to local media reports.

The cause of the incident is being investigated.

The protective doors used in Chongqing are a feature of the mountainous city's rail system and were primarily used in wartime, a staff member of the city's rail transit department told online news portal Thepaper.cn.

"Protective doors were primarily used during the anti-Japanese war and now to prevent nuclear catastrophes," the employee said.

During the second world war, hundreds of wartime bomb shelters were built into the sides of mountains in Chongqing to provide protection from Japanese bombardment.